Queen of Hearts by Whitney Dineen blitz with giveaway 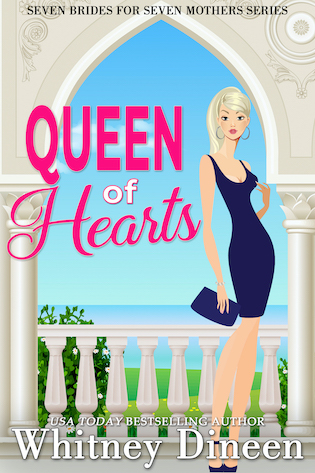 * All books in this series read as standalones.

Queen Charlotte of Malquar has a talent. She’s already helped two of her children find mates, and now she’s convinced her daughter’s new secretary would be a perfect partner for her remaining single son.

Agnes Dupuis has a plan. She’s going to work for the royal family for a couple of years before opening her own upscale employment agency. When she starts her job with Princess Aubrey, she knows everything is on track. After a short time, she gets transferred to the crown prince’s staff, and she couldn’t be more ecstatic.

At thirty-five, Prince Andrew knows it’s past time for him to find a bride. Unfortunately, it’s a nearly impossible task. While he would like to marry for love, it doesn’t look like that will be an option. His future wife will be queen one day and she must have all the necessary skill sets to thrive in that role.

Sparks fly when Agnes and Drew start to work together. Drew fights his attraction for his new secretary as hard as he can. Meanwhile, Agnes doesn’t know what she’s doing wrong. She can’t seem to do anything to make the prince happy.

Will Queen Charlotte be responsible for another match? Or are Agnes and Drew destined to forever butt heads.

Sir, I have the update you requested on McMillian.” In the month that I’ve been Prince Andrew’s secretary, I can count on one hand the number of times he’s looked at me when I’m speaking. Currently, I’m attempting to communicate with his back.

Waving his hand in the air in what I can only construe as a dismissive manner, he says, “Leave it on my desk and I’ll read it later.”

“It’s not a written update.” Try as I might, I can’t keep the edge from my voice. While the rest of the royal family treat me kindly, Andrew has never been so inclined. He acts like I’m his own personal robot who doesn’t require basic courtesy.

He continues to face the window, allowing me the opportunity to study him. He’s taller than most at three inches over six feet, with proud broad shoulders, and short dark hair so thick a bird could nest in it—there’s something about my new boss’s appearance that brings to mind Disney’s Prince Charming. It was Cinderella who had the bird fetish, right?

“Then put it in writing and leave it on my desk.” The sharpness of his tone snatches me from the precipice of the illusion that Andrew might have Charming’s personality. No, nothing charming here.

“Yes, sir.” I shift on my heels as I start to feel a blister forming. These infernal stilettos. I could wear sporting shoes to work for all Prince Andrew would ever notice. “Will that be all, sir?”

He abruptly turns around and glares at me, his penetrating brown eyes practically nailing me to the floor. “No, that’s not all. Will McMillian be coming back to work soon?”

The prince grunts loudly. “Has his replacement been found yet?”

Is this guy a moron? “I’m his replacement, sir. I thought you knew that.” My spine straightens, making me very close to his own height with my new shoes.

“I was under the impression you were a temp.” His eyebrow cocks in such a supercilious manner, it’s all I can do not to punch him.

“I started out that way, but I was informed last week that I was doing such a good job I was being made a permanent member of your staff.” Put that in your pipe …

“Who told you that?” he demands angrily. Instead of letting me answer that the Master of Household himself told me, Andrew continues, “As far as I’m concerned, you are not permanent.”

How in the world am I supposed to respond to that? The whole point of me working in the royal household is to make a strong enough connection to open my own employment agency. Once I do that, I’ll be able to supply staff to the palace. The only way that’s going to happen is to impress my current boss. The same man who appears to hate me.

So, while I want to take my shoe off and smack Andrew over the head with the sharp pointed heel, I force myself to ask, “Is there something you’d like me to do that I’m not currently doing?”

His glare darkens as he takes a step forward. I stand rooted to the floor, unable to look away. “You’re a woman.”

“How astute of you.” Yes, my response is snotty, but I’ve had just about enough of being treated like a disposable entity by this patronizing man.

“Excuse me?” Another step.

“How do you figure that?” How in the world did I have a crush on this arrogant beast throughout my entire adolescence? I don’t care how gorgeous he is, the prince is not a nice man. Let me rephrase that. He’s not nice to me. He seems to love everyone else.

“Women are much better multi-taskers than men.” I raise one finger in the air to start ticking off my points. Another finger goes up. “We’re very attuned to details …” More join in. “We’re empathetic, nurturing, and are able to see more than what is required of us.” If I don’t stop talking now, I may truly be out of a job.

“And you’re saying these qualities are inherent to your sex? That men do not possess them?” If he walks any closer to me, he’ll be standing behind me.

I force my gaze up to meet his. “That’s what I’m saying.”

I reach up and pick an invisible piece of fluff from his collar. “Your shirt is starting to fray.” I turn my gaze back to his in a challenging manner. “Your valet is a man, is he not?”

“If your valet were a woman, you would be wearing an impeccable shirt with no sign of wear.” That may or may not be an accurate statement as I’ve made up the sorry condition of his apparel. It appears that women can also be liars when it suits them.

“Are you now applying for the job of my valet?” I know he’s being facetious, but I can’t help the stirring I feel at the thought of what that job would entail. Assisting Andrew in the bath or shower if needed, helping him to go from a naked state to a clothed one, undressing him for bed at night … It’s getting hot in here.

“I leave my bedchamber at eight o’clock every morning.”

“How lovely for you.” I mean, seriously, what else am I going to say?

“You will now meet me there at seven forty-five and inspect my clothing for any imperfections before I start my day.”

“But I don’t come to work until nine.” Surely, he doesn’t expect me to get here early to make sure another member of his staff is doing his job.

“You now arrive at seven thirty so that you can get to my rooms by seven forty-five.” He leans down so menacingly, if he were a tiger, I’d be afraid for my life. “That is, if you want to keep your position. If you’re unable to do so, I’ll gladly hire a man to replace you.”

So that’s his game. He’s actively looking for a way to get rid of me. If the success of my future agency wasn’t on the line, I’d turn around and walk out of his office without a backward glance. Unfortunately, that action will not aid my plans. “Would you like me to bring your coffee up with me?” I mean, hell, if I’m moonlighting as his valet’s helper, maybe he wants me to take on some kitchen duties.

“I think I can trust the kitchen to deliver my coffee.” He cocks his head to the side, before adding, “Unless you care to complain about them, as well.”

I shake my head vigorously, hoping to activate some good sense. I really don’t need to get into any more trouble. I look at my watch and see that it’s nearing five. “If I’m expected back here so early, I’ll head out now.”

Being that I’ve never seen him past our four o’clock meeting since the day I started working for him, I’m certain this is a lie. Which of course can only mean one thing.

Prince Andrew has just declared war on me. 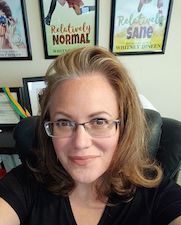