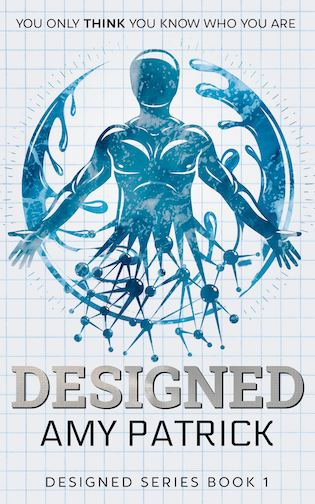 Seventeen-year-old Mireya is the youngest person on Earth in 2055. Well, one of them. She and her classmates on the military base where she lives are survivors of Zika-Two, a mosquito-borne virus that took out the very youngest and oldest of the world’s population fifteen years earlier and rendered the remaining humans infertile.

Formerly banned research into cloning, genetic engineering, and artificial intelligence is green-lighted by a government desperate to prevent looming human extinction. In fact, it was experimental nanotechnology that saved the lives of Mireya and her friends.

She’s always been told this makes her special. She certainly doesn’t feel special. As hard as she tries, she can never seem to please her indifferent parents, and her periodic memory lapses threaten to sink her already-shameful class rank to dead last. She just wants to be like everyone else, to be normal.

Mireya’s never left the base, never wanted to, and never questioned why she’s been content to stay there her whole life—until she runs into Heath. Actually, he bumped into her with his Gideon Corp delivery van. She’s not hurt, but she is baffled.

Why did the alluring young guy look at her like he knows her? And why did he seem shocked at her very average eye color?

When one-by-one her friends visit the physician and come back acting like strangers, Mireya decides to venture beyond the gates of the base to the nearby city of Atlanta to search for answers. And for Heath.

What she’ll find is the imposing walls surrounding Gideon Corp, the world’s largest corporation, hide many secrets about the cataclysmic global event and perhaps even Mireya herself.

DESIGNED is perfect for readers who loved Hunger Games, Divergent, Delirium, The Wrath & the Dawn, and the Selection.

The loud electronic voice reached me a second too late. I’d already stepped off the curb into the street and directly into the path of a delivery van.

A flash of white and chrome filled my peripheral vision as the bumper made contact with my left hip, sending me to the pavement with a wince and a yelp.

The good news was I wasn’t flattened by the thing. The nearly silent electric vehicles were programmed with collision avoidance tech that slowed them automatically in case of a sudden obstacle, which meant it hit me hard enough to knock me over but not hard enough to crush bones.

The bad news was I could already hear the shouting of the obviously perturbed operator through the van’s closed windows. No doubt the accident had surprised him as much as it had me.

He’d probably been relaxing in the back of the self-driving vehicle watching vids or reading when he’d felt the jolt and sudden stop. Now he was storming around to the front of it, spewing a stream of profanities.

“What the hell are you doing?” the van operator demanded. “Didn’t you see me coming?”

Before I could respond or get up on my own, a pair of strong hands slid beneath my arms. He picked me up off the ground and set me upright. I would have protested the invasion of my personal space, but it all happened too fast.

Brushing off the seat of my uniform, I tested my footing, lifting and wiggling one foot then the other.

The ache in my tailbone told me I would be sporting some very colorful bruises tomorrow, and my butt couldn’t have been any wetter if I’d cannonballed into a swimming pool. Lovely.

“So are you okay? Say something.”

Anger still emanated off the guy in waves, but his deep voice now held a note of concern. What could I say? I felt like an idiot.

“Of course I saw you. I just thought getting run down would be a good way to score some tech augmentation in my lower limbs.”

I finally glanced up at the man– who hadn’t responded and was not laughing at my joke.

My hair was in my eyes, disheveled from my fall. I pushed it from my face, and the sight in front of me nearly knocked me backward again.

Technically, I supposed he was a man, but he was younger than I’d expected, close to my age.

He was big. And angry. His dark brows were drawn together tightly. It wasn’t the forbidding expression that stunned me. It was his eyes.

Their color was like nothing I’d ever seen before– a spellbinding combination of blue and green so beautiful, so piercing, it almost defied reality.

I was so mesmerized it took me a second to realize he was staring at me, too. He’d been in the middle of a question.

“So then you’re not hur–” but he’d broken off mid-word.

After a long pause during which he continued to stare at me like he’d never seen a girl before, he spoke again. “Your eyes. They’re brown.”

“Yeah…” I dragged the word out into a question. “… last time I checked.”

Something about his troubled expression struck a cord of recognition. I glanced from his incredible eyes to the shock of dark hair above them and down to the breadth of his shoulders then the rest of his tall, big boned frame and then at the name badge on the front left pocket of his company uniform.

“Have we met before?”

The guy blinked rapidly and back-stepped toward the delivery van, his head moving in a tight, rapid shake.

He paused for my answer, but his back and shoulders were plastered against the front of the van like I was dipped in flu virus and he hadn’t had a vaccination in years.

The instant I said, “I’m fine,” the guy turned and climbed into the van. Within seconds it was whispering away down the road, the unmistakable Gideon Corp logo on its back doors shrinking then disappearing as the vehicle rounded the corner.

Oookay. It was obvious why he was a delivery man for the world’s largest biotech company and not employed in some capacity where he might have been required to interact with actual humans on a regular basis. 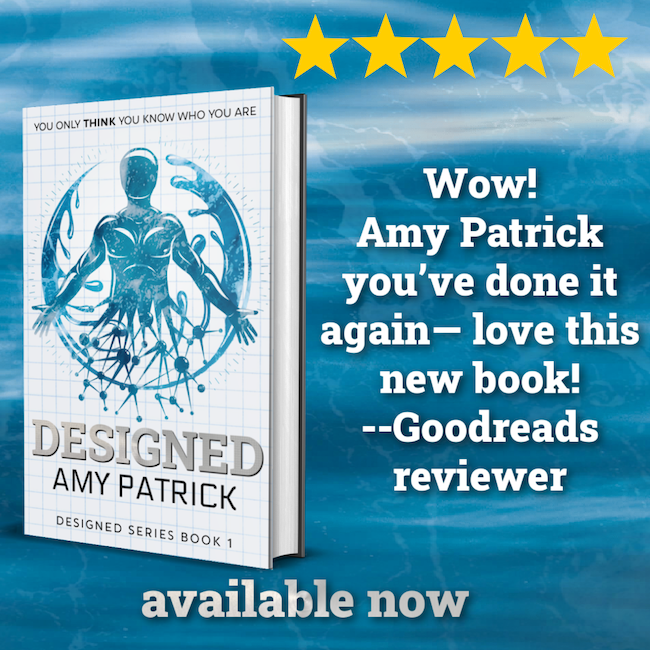 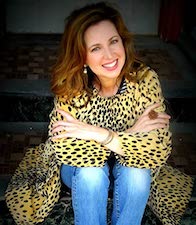 Amy Patrick is the award-winning author of the popular Hidden Saga, Crimson Accord series, and Designed, a new YA dystopian romance. She lives in Rhode Island, where she enjoys writing in her car at the beach year-round and dreaming up captivating new science fiction and fantasy worlds for her readers to devour.