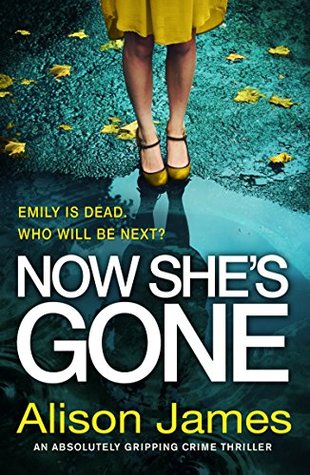 She took a mouthful of the sweet liquid and started to feel a pounding in her head. Arms went around her waist and she was half lifted and half pulled. The last thing she was aware of was her head hitting a step…

Sixteen-year-old Emily had everything to live for. A bright, beautiful teenager with a promising future ahead of her. But in one night her life is cut short. The police say it’s an accident. But her parents think she was murdered.

When Detective Rachel Prince is called in to investigate the shocking death at the height of the Edinburgh festival, her instincts tell her that things are not as they first appear. Something is very wrong.

As the case takes an unexpected turn, Rachel discovers a chilling link with the suspicious death of another international student, who stayed in the same house as Emily two years before.

Just as Rachel finds herself on the hunt for a serial killer, a painful relationship from her own past catches up with her. And Rachel must decide what is more important – catching the killer or keeping her own secrets?

Now She’s Gone by Alison James is the second book in the Detective Rachel Prince police procedural series. What I’ve come to expect from this author is a very intense case and this installment was no exception with murder and molestation involved.

With the death of a sixteen year old Rachel gets the call to head out and look further into the case to make sure it is being handled correctly. As Rachel digs further she starts to believe Emily’s death may be connected to another in the past and the clues begin to lead to even darker events than she ever could have imagined.

With this book it was easy to remember exactly why I enjoyed the first when it didn’t take long at all to become comfortable with Rachel yet again. If looking for hard hitting female lead in this type of story Rachel certainly qualifies and the cases in the series are those to make a reader take notice and really become invested in the outcome.

On the not so positive side though with this one there are some things going on in the story in which had my thought process going to the place where I think things end up a little to convenient with some details. I don’t want to be too specific but certain things just didn’t see that realistic to me in the story leaving me to rate this installment at 3.5 stars but with intense cases and a likable detective I will be back for more.