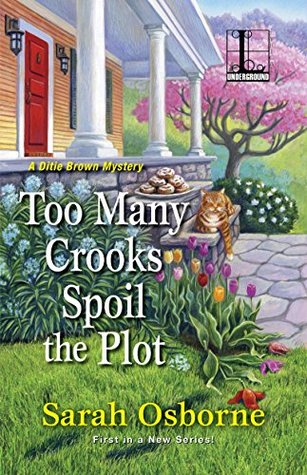 Title: Too Many Crooks Spoil the Plot

Pediatrician Mabel Aphrodite Brown adores kids. So when a childhood friend asks Ditie to babysit her kids for a few days, she jumps at the chance. She never imagined she’d be solving a murder too . . .

Despite growing up together, Ditie hasn’t seen Ellie Winston in two years, and she didn’t even know Ellie was living in Atlanta. But when Ellie asks her to take care of Lucie and Jason for the weekend, she thinks nothing of it. They’ll bake cookies together, play with her dog—it’ll be fun! Until the police call with terrible news . . .

Ellie may not have been the best friend, but who would want her dead? Could it have something to do with the vague get-rich-quick scheme she mentioned to Ditie? Or the men in a black truck following her and breaking into her home? Not sure who to trust other than her best friend, Lurleen, Ditie’s buried maternal instincts kick in to protect the kids and find their mother’s killer—before they’re orphaned again . . .

Too Many Crooks Spoil the Plot by Sarah Osborne is the first book in the new A Ditie Brown Mystery series. Now from the cover and title of this book I was going into this one expecting a lighthearted fun cozy read but unfortunately that wasn’t the case with this one which is the reason I dropped my rating to 2.5 stars.

The story begins with Mabel Aphrodite Brown, or Ditie as she’s known by her friends, being contacted by an old friend whom she hadn’t seen in a couple of years despite them being very close in the past.  Ellie is actually now living nearby and she has a favor to ask of Ditie, she’d like her to watch her kids for a few days and “keep them safe” and they really miss Aunt Ditie.

Ditie agrees to take the kids and thinks it will be fun having the little ones around for a few days, that is until the police arrive to tell Ditie that Ellen has been killed. With two grieving children in her care the last thing Ditie expected was to be pulled into whatever danger Ellie had been involved in and she needs answers before it’s too late.

Now, Sarah Osborne obviously has talent as a writer as she wrote a decent mystery with likable characters but the story missed the mark with me since it was such a downer and when I pick up a book of this nature I’m looking for fun. It’s not supposed to be a young mother leaving her children behind that gets killed, it’s supposed to be the annoying “bad” guy of the book. It’s not supposed to bring readers down when we learn that the mother in question was leaving a lot of the child care to her nine year old.

To top of the gloominess the main character works around a lot of other heartbreaking things that get mentions in the book. Gone was the humor and quirkiness that I crave from a cozy so my rating is really a reflection of this simply not being a cozy read that would make me smile and laugh while trying to figure out the mystery although if interested in a more serious tone to that type of book it may be for you.