Hungry for the Wolf by Kate Rudolph blitz with giveaway 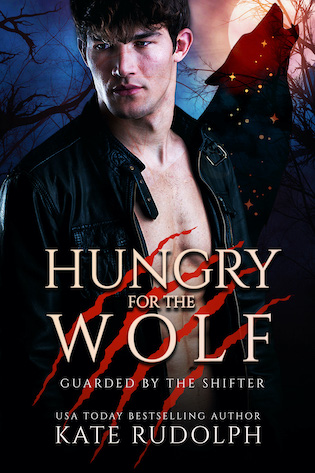 When Bryan’s assigned to guard Kerry before she testifies in a high profile case, he expects it to be a simple job. Falling for her is against every rule, but no shifter can deny the mate bond.

Kerry Delgado is anything but simple.

When the bullets and fur start flying, Bryan discovers that he and Kerry have far more in common than he imagined. His wolf demands he does everything possible to keep her safe, but she’s tangled up with dangerous men. And she may hold the key to the mystery of his pack’s existence.

He’s supposed to be a regular bodyguard, even if he’s a werewolf. But when there’s magic involved, nothing is simple. And if Bryan wants to claim Kerry as his own, he’ll need to unravel the mystery before it’s too late and he loses everything.

The more Kerry thought about it, the worse things got. And by the time she was done showering off her run and changing into clothes that would have to do, her hands shook. Her stomach roiled, thoughts of hunger pushed away by panic.

They had to move. Someone could already be coming for her. What if whoever had sent those gunmen had already tracked her phone? She should have chucked it into the Hudson before they had the chance.

Bryan had been taking a shower of his own when she came upstairs, but the water was off now and the house strangely silent. Her father’s friends would be here sometime and she didn’t want to meet them. The people he called friends were all as slimy as they came and even worse than he was. She didn’t want to make small talk or answer questions.

What would happen if gunman attacked the house and only her father’s people were here?

She was tempted to call him and warn him, but a dark part of her said that he’d gotten her into this mess in the first place. If she hadn’t been moving mysterious boxes for his associates, no one would have attacked the gallery.

She’d stopped trafficking in those crates and her father hadn’t insisted that she start up again. But that wouldn’t last forever.

His men could handle themselves. And hopefully no gunmen would come.

She heard Bryan’s footsteps before he stopped in front of her slightly open door and knocked on the frame, pushing it further open so he could lean in the doorway. “Hey,” he said softly.

Her mind flashed back to the kiss, her body suddenly hot before a cold wave of dread washed over her. They’d been out in the open back there. Someone with a sniper rifle could have taken them out. And neither of them would have seen it coming.

What were they thinking?

Stupid werewolf hormones were going to get them killed.

“We need to clear out.” She tried to sound calm, commanding. In control. Her voice didn’t shake, so she was calling it a win. “My father called. He’s loaned this house to a friend and expects us gone before his guests get here.”

“How did he know we were here?” Bryan didn’t move into the room, and his voice was all business. Maybe he was trying to pretend the kiss hadn’t happened.

Good. They could both pretend and go back to a purely business relationship. One hurdle down.

Liar, the voice that sounded a lot like her inner wolf whispered. He’s ours.

Want to know when Kate releases a new stories and get a free ebook?

Kate Rudolph is an ex-derby girl who lives in Indiana. She loves writing about kick butt heroines and the steamy heroes who love them. She’s been devouring romance novels since she was too young to be reading them and had to hide her books so no one would take them away. She couldn’t imagine a better job in this world than writing romances and sharing them with her fellow readers.