One Bossy Date by Nicole Snow blitz with giveaway 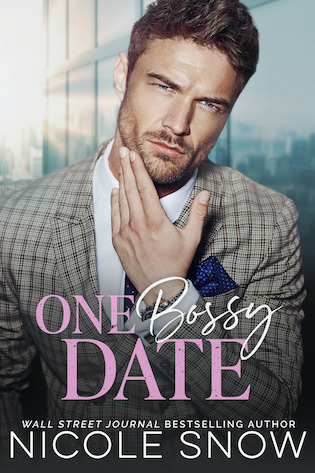 How about when you wake up with a giant stranger showering in your hotel room?

There’s nothing tiny about Brock Winthrope.

He even roars like a lion when he sees me. I scream back. And after narrowly avoiding a murder scene, we’ve got trouble.

He says he’ll fix our reservation blunder since he’s the manager (he’s not).

He thinks I’ll smack his resort with the rotten egg review from hell (I might).

I’ve never seen a man so grumpy groveling his heart out to wow me (it’s working).

Oh, but it gets better.

Brock whisks me away on an amazing “date” and things get heated.

I wasn’t supposed to see him again.

Not at this dumpster fire marketing job I desperately need.

Not when I crash into him—literally.

Definitely not when I find out he’s the crankyface billionaire CEO signing my checks.

Cue the freaking out.

The tension thicker than quicksand.

The hopeless promises to “just do my job” without choking on Mr. Grumpmuffin’s attitude.

What’s worse than one messy date with your radioactive boss?

Expect enemies-to-lovers fireworks! Delightful banter, slow-burn sweetness, plus one office beast who finally learns how to smile for the lady who ignites his world.

I push my face to that crack of light, trembling.

There’s definitely a low hissing sound like water. The shower, I think, thousands of little rainfall droplets splashing against a hard surface.

Could it really be a maintenance guy who skipped on giving notice?

Could it be that easy?

But at three o’clock in the flipping morning without any notice?

It could be a burst pipe or a malfunction, though.

My toes scrunch. I place my hand on the door, ready to throw it open and accept my fate.

I wind up cracking it another couple inches.

At first, I can’t see through the glassy part of the stall.

But when the silhouette moves in the steaming fog—

So, the staff wouldn’t be showering in my bathroom. We can rule out innocent mistakes.

A minute ago, I was determined to be Miss Danger incarnate, but all the adrenaline that moved me this close to certain death evaporates.

The lamp in my clammy hand feels like it weighs a ton.

I really, really don’t want to do this.

But what’s the other option?

Just up and wait for Mr. Shower Psycho to come slaughter me in bed? Or run for the front door screaming and pray he doesn’t catch up while I wait for the private elevator to this floor?

I’m out of time and options. It’s go time.

So I throw the door open, clasping the lamp like a bat.

I played softball years ago. I’ve got this.

If only anything on Earth could prepare me for what I find.

…are hot serial killers a thing?

Because this guy is a certified GQ model.

A six-foot-plus wall of muscle surrounded by steam. He must like his showers scorching hot.

It takes a few seconds to peer through the haze, and I can’t make out much more until he moves.

Believe me, I see enough.

His whole body is toned and tight and chiseled by a mad sculptor dead set on crafting the perfect man.

His large hands lather foam over biceps bigger than my head.

I have to unglue my eyes as he stands beneath the spraying water with his eyes closed, smiling like he enjoys his own touch a little too much.

With a body like that, I’m sure the narcissism comes naturally.

My gaze slides down his broad chest, diamond-cut abs, and sculpted pelvic bone to—

Heat throbs under my cheeks. I hate that I bite my lip, but I’ve never seen a man who’s part stallion before.

Moby Dick has nothing on this well-endowed freak.

For a second, my brain rabbits, wondering what it would feel like to wrap my hands around something that enormous—if I could even close them.

Let alone do anything else.

Every part of this man is made to punish.

All rough strength and hard edges and a literal battering ram jutting out between his legs, half-hard from the steam, I guess.

But back to that whole serial killer thing…is he a convict?

Did Hawaii have a supermax jailbreak recently I didn’t hear about?

My body squirms at the thought, still hideously stuck on Goliath and his stupid scary, stupid hot good looks that are making me—what else?—stupid.

There’s no other word for it when my arm turns to mush and the crystal lamp slips out of my sweaty hands.

It shatters against the floor a second later like someone throwing a box of ornaments.

Everything happens in slow motion.

Goliath’s eyes pop open and his head whips around. He glares at me like a tiger rudely awakened from a nap.

With my one and only weapon in pieces on the floor, there’s no hoping he doesn’t see me now.

I scream before I even realize I’m doing it.

I scream so loud my throat hurts, but my voice has no off switch.

I scream for dear life for ten solid seconds until my own ears ring and I’m winded.

Then I stumble backward, doubled over and breathless.

Maybe, by some miracle, someone will hear me up here and send help.

Except the presidential suite is the only room on this floor, and you have to use a card in the elevator to get up here.

Amazingly, Goliath isn’t out of the shower yet.

That means I still have time.

I need to run like hell for the elevator while I have a head start.

Sucking in a deep breath, I straighten up, willing my legs to move.

I’m about to turn and run but the shower door swings open so fast it’s dizzying.

My lethal Adonis steps out, snapping a towel from the shower rack. He whips it around his waist faster than I can blink.

My gaze follows his movement.

Again, I hate that he’s so hot.

I hate that I’m losing time as I spin around for the door, practically leaping for it.

“Stay or it’s going to be much worse!” he bellows, his voice rolling thunder.

Nicole Snow is a Wall Street Journal and USA Today bestselling author. She found her love of writing by hashing out love scenes on lunch breaks and plotting her great escape from boardrooms. Her work roared onto the indie romance scene in 2014 with her Grizzlies MC series.

Since then Snow aims for the very best in growly, heart-of-gold alpha heroes, unbelievable suspense, and swoon storms aplenty. With over a million books sold, she lives for the joy of making two people fight with every bit of their soul for a Happily Ever After.