Kingdom of Acatalec by S.M. McCoy blitz with 2 giveaways 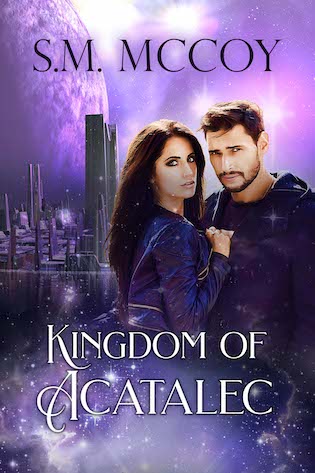 I work with aliens, my best friends is held hostage, and everyone wants to murder me before the Lord Prince can magically bond to share my power? If I had known an illegal drone race would lead to murder, kidnapping, and lies, then I might have thought better about the giant prize of credits, and the dream of walking again.I never met my best friend in person until a drone race gone wrong had both of us vying for our lives against a secret alien society. To make matters worse… my boss was one of them, and I couldn’t decide if he was trying to save my life, or the reason I was in trouble to begin with.

He sighed. “The less you know about these people the better.”

So they were mobsters, I confirmed to myself. I mean, anyone hosting an illegal drone race couldn’t be considered a quote unquote good guy, but I hadn’t really thought about it before. I merely liked the extra cash that most of these races provided, but this race was much more risky than anything I’d ever been involved with.

“If we win the race, you can get through this whole thing without anyone knowing who you are. You keep your mask on, and you stay in the drone assigned to you. It isn’t uncommon for winners to take on a persona, but if you lose you will be forced to pay off your debt, and we don’t want to owe these people, they don’t take credits. You will be forced to join the Drone Guard, as you are now considered one of the top pilots, and that is more valuable than credit.”

“Like indentured service? They can’t do that… can they?”

“They can, and they do, though most are more than happy to devote themselves to the cause.” He smirked at me. “I don’t see you as being a follow orders kind of pilot,” he joked, “If you were, we wouldn’t be here.”

I glared at him. “This isn’t funny. You could have been more upfront and said, ‘Tyler, I know you’re a sucker for illegal drone races, but you’d been getting yourself involved with gangsters.

Please sit this one out. ’Would have been a nice heads up.” I lowered my voice and did a horrible impression of his silky deep tone that sounded more like a gruff cartoon character.

He leaned forward and grabbed my hand in his then smoothly said, “Tyler, don’t get involved with illegal drone races. Being as they are illegal, they are usually run by powerful overlords that don’t care about your wellbeing. Please listen to me next time.”

I pulled my hand from his and swatted at him. He laughed, and leaned back into his seat, and this was the most relaxed I’d ever seen him. Which was surprising considering we were going to an evil overlord’s lair and trying to win a drone race to save my friend Kelly from financial ruin, and now make sure I didn’t become an indentured pilot to amoral goons.

“Would that have made a difference,” he asked seriously to me.

I frowned and shook my head. “Probably not. I wouldn’t have believed you.”

“And you believe me now?” He quirked a brow. He was quite handsome when he wasn’t reprimanding me.

“After the cutthroat race to even be here right now, unfortunately yes. Plus,” I stopped and shook my head, changing my mind about telling him how much I was worried that I still hadn’t heard from Kelly. She was the one who even signed us up for this race, and it made me nervous knowing who we were racing for was dangerous. What if she didn’t make it through the first race, and was lying in a ditch somewhere, or worse at the hospital because another racer crashed her into oncoming traffic? Picking at my nail cuticle I flexed my fingers and then dug them into my pant legs to stop myself from picking until I had no more skin to pick.

He watched me expectantly, waiting for me to finish. The way his eyes tore into my soul made me want to tell him all of my secrets, my lip quivered because my insides hurt thinking about anything happening to Kelly. She was all I had when this was all over, at least I hoped I still had her after this was over. Misinterpreting why I was so emotional he nodded and tried to reassure me, “You’ve far surpassed most pilots I’ve seen in this race during training, but fear will help you stay sharp. Let your instincts help protect you when the time comes.”

“My instincts are what I fear most right now.” 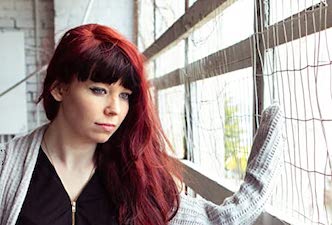 Stevie Marie is the author of young adult paranormal fantasy, The Divine Series, and The Acatalec Series. Born within the apex of another universe, where magic flows like leaky faucets, and forged from the fires of the Underrealm she dug her way to Earth and reluctantly participates in human society, secretly returning to her home world to relay the stories of her monsters, and the troubled love of her people. When she isn’t writing she’s designing clothing, momming it up with her tiny monsters, or narrating audiobooks in the rainy city of Seattle, Washington.