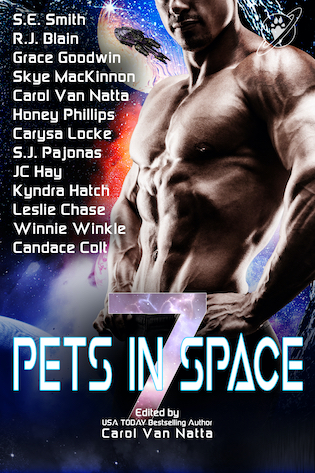 Pets in Space® is back for a new year of adventures!

Pets in Space is back and better than ever! Featuring 13 original, never-before-released stories from some of today’s bestselling science fiction romance authors, starring your favorite sci-fi pets. These furry, feathered, and slightly alien friends are always ready for a new adventure with their two-legged human and alien companions. From dogs to cats to sea creatures and unicorns, these romantic tales show that pets are more than just animals – they’re family.

The Pets in Space 7 authors continue their vital support of Hero-Dogs.org, the non-profit charity that improves quality of life for veterans of the U.S. military and first-responders with disabilities.

Don’t miss out — grab this limited-edition anthology before it’s too late!

What was the human doing here? No sane female would seek out these bastards.

Until she appeared, everything had been going to plan. Humans in a black vehicle had arrived to pick up some Quell at the odd window on the side of the building. I’d marked their vehicle so I could track them once I was done here.

Then? Chaos. Human weapons firing. The female was injured, severely.

The Siren operatives didn’t know I was here. Not yet. But I would take pleasure in ending their lives. Males of worth did not harm females of any species.

“Let her bleed out. Kill the animal. We can dump the bodies later.”

I moved closer without making a sound.

“No!” The female’s voice rang out.

I watched the Rogue 5 hybrid lift his ion blaster and point it toward the animal. I could not afford to intervene. Rokor, their leader, was dangerous. Deadly. I could not lose foc—

I felt the blast to my hip as if I were the one shot. The barrier in my mind shattered like broken glass and suddenly I was seeing through two sets of eyes.

She held up her small, blood-stained hand and begged for her pet’s life. “Don’t hurt her. Don’t. Please.”

I saw myself through her eyes, a shadow moving closer, Death himself. She was not afraid of dying, nor of me. She wanted—me. My cock twitched. Hard. Hot. My hand burned. She wanted to be in my arms. She ached for me.

The connection faded yet I clung to the fleeting warmth in my mind, desperate to feel it again. It had only been a few seconds, but I was out of time.

Her beast must have sensed the danger as well. The golden animal charged the male who held the ion blaster. 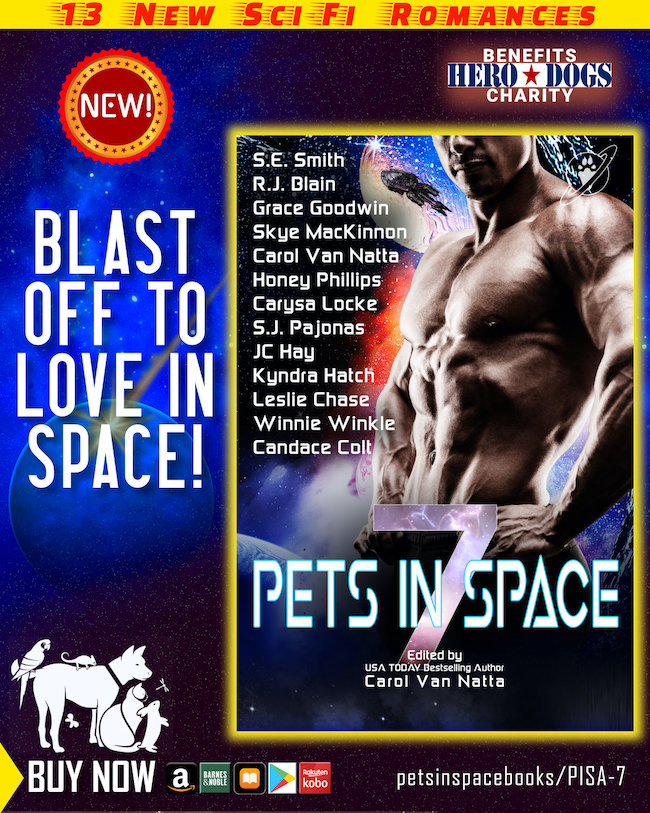 ← The Empress of Time (The Keeper of Night #2) by Kylie Lee Baker Blog Tour
Kingdom of Acatalec by S.M. McCoy blitz with 2 giveaways →

2 Comments on “Pets in Space 7 Anthology blitz with giveaway”