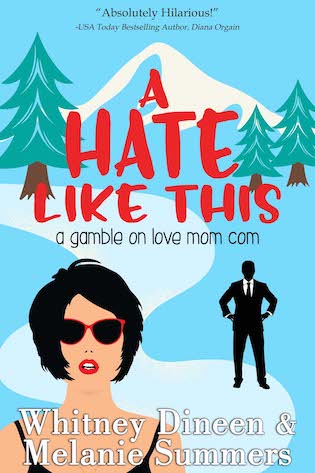 Single mother Moira Bishop hates when her family interferes in her love life. If life as a young widow isn’t hard enough, just add three boys, a slew of unruly pets, and ownership of Gamble Alaska’s only diner. The last thing she needs is a man to look after too.

Entertainment lawyer to the stars Ethan Caplan hates his clients. There’s only so much coddling and placating a man can do in a lifetime. He’s finally decided he’s had enough, so he escapes to the tiny no-horse town of Gamble to work on the novel he’s always wanted to write.

Positive that Alaska will be distraction-free, Ethan’s sure he can pen a bestselling legal novel. That is until he lays his eyes on Moira Bishop. Suddenly he finds himself having five meals a day at the diner, just so he can talk to her for a few minutes.

When Moira’s son wins tickets to the Galaxy Studio Theme Park in L.A., Ethan jumps at the chance to play host to the family. He’s sure he can win her over by showing her how glamorous life could be with him. With the help of his friends, he plans the date to end all dates, hoping one incredible night will change her mind about giving love a second chance.

Will Moira open her heart to Ethan? Will Ethan do what it takes to prove that he can be the man Moira and her boys need in their lives? Will little Colton be tall enough to ride the Galactic Mindbender?

Find out in the deliciously fun second installment in the Gamble on Love Momcom series.

Moira Bishop is something of a conundrum. On the surface she looks like a go-getting live wire, but beneath that façade she appears to be experiencing her own struggles. Being a parent has never been a driving force in my life, so I don’t spend much time imagining what it’s like. Yet I can certainly see that being a single parent to three boys is an exhausting endeavor. Add her job at the diner, and she probably doesn’t have a minute for herself.

Moira goes over to a youngish couple sitting at a table on the other side of the dining room. The woman openly scowls at her before demanding a coffee refill. I wonder if they had some sort of argument before I got here. Or maybe the woman is just a horrible person. She has a

hard look about her. I pull my phone out of my pocket and open the notes tab—I might be staring at the villain in my novel. I hurry and type out a description of her.

A few minutes later, Moira sets my meal in front of me. “I brought hash browns and bacon to help fuel your day. But only three eggs, so you won’t get weighed down.” Her eyes sparkle with humor.

“You realize the amount of food on this plate could feed a family of six in Beverly Hills.”

She giggles loudly. “I doubt most families in Beverly Hills would eat much of what we serve here.”

“Priorities are definitely a bit skewed there. So are portion sizes.”

“Remind me never to move to Beverly Hills,” she says sardonically.

“You can see why it was imperative I got away,” I tell her. “I’ve been slowly starving for years.”

As she walks back to the counter, I look down at my plate and dig in with gusto. While I stuff my face, I watch as Moira zips around refilling cups and dropping off bills. By the time I’ve eaten every bite, I’m so full I’m wishing I’d ordered a bowl of Special K. .

Moira returns to my table. Staring at my empty plate, she says, “Oh, dear, what would the good folks from Beverly Hills say?”

“They’d either get busy planning an intervention or they’d pool their resources and find me a surgeon to perform an emergency gastric bypass.” I look around the now-empty diner before indicating the seat across from me. “Care to join me?”

“Sure.” She sits down into the booth across from me and groans. “Oh, that’s nice.” Her trainer-clad feet suddenly appear on the bench next to me. “It’s still early, but my dogs are already barking. What’s up?” 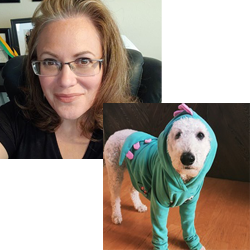 Melanie made a name for herself with her debut novel, Break in Two, a contemporary romance that cracked the Top 10 Paid on Amazon in both the UK and Canada, and the top 50 Paid in the USA. Her highly acclaimed Full Hearts Series was picked up by both Piatkus Entice (a division of Hachette UK) and HarperCollins Canada. Her first three books have been translated into Czech and Slovak by EuroMedia. Since 2013, she has written and published three novellas, and eight novels (of which seven have been published). She has sold over a quarter of a million books around the globe.

In her previous life (i.e. before having children), Melanie got her Bachelor of Science from the University of Alberta, then went on to work in the soul-sucking customer service industry for a large cellular network provider that shall remain nameless (unless you write her personally – then she’ll dish). On her days off, she took courses and studied to become a Chartered Mediator. That designation landed her a job at the R.C.M.P. as the Alternative Dispute Resolution Coordinator for ‘K’ Division. Having had enough of mediating arguments between gun-toting police officers, she decided it was much safer to have children so she could continue her study of conflict in a weapon-free environment (and one which doesn’t require makeup and/or nylons).

Melanie resides in Edmonton with her husband, three young children, and their adorable but neurotic one-eyed dog. When she’s not writing novels, Melanie loves reading (obviously), snuggling up on the couch with her family for movie night (which would not be complete without lots of popcorn and milkshakes), and long walks in the woods near her house. She also spends a lot more time thinking about doing yoga than actually doing yoga, which is why most of her photos are taken ‘from above’. She also loves shutting down restaurants with her girlfriends. Well, not literally shutting them down, like calling the health inspector or something–more like just staying until they turn the lights off.

She is represented by Suzanne Brandreth of The Cooke Agency International.