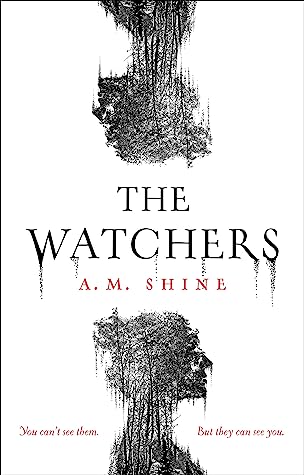 You can’t see them. But they can see you.

This forest isn’t charted on any map. Every car breaks down at its treeline. Mina’s is no different. Left stranded, she is forced into the dark woodland only to find a woman shouting, urging Mina to run to a concrete bunker. As the door slams behind her, the building is besieged by screams.

Mina finds herself in a room with a wall of glass, and an electric light that activates at nightfall, when the Watchers come above ground. These creatures emerge to observe their captive humans and terrible things happen to anyone who doesn’t reach the bunker in time.

Afraid and trapped among strangers, Mina is desperate for answers. Who are the Watchers and why are these creatures keeping them imprisoned, keen to watch their every move?

The Watchers by A.M. Shine is a horror read. The story in this one will make you invest in a good GPS and is told by changing the point of view between the various characters.

When Mina agreed to deliver a parrot for her friend Peter for a little extra cash she never could have foreseen what was coming. As Mina was traveling in the remote roads her car broke down right at the edge of a forest. With nothing behind her for miles Mina heads into the woods with the parrot in tow.

Just as night is beginning to fall Mina sees a woman calling out to her to hurry to a shelter. Mina finds that in the shelter are other travelers who are just as trapped as she now is by the things watching them out in the surrounding woods.

The Watchers by A.M. Shine was a fast paced addicting horror story. I quickly flew through this one engrossed in what was out in those woods and trying to figure out where the story would lead. As weird as it sounds with a group of strangers being trapped the story still had plenty of action then of course a few twists to keep a reader engaged. Definitely a creepy and thrilling tale.

A.M. Shine is a writer and advocate of the Gothic horror tradition. Born in Galway in the west of Ireland, there he received his Master Degree in History before sharpening his quill and pursuing all things literary and macabre. His stories have won the Word Hut and Bookers Corner prize. He has published two collections, Coldwood: the haunted man and other stories and 13 and is a member of the Irish Writers Centre. The Watchers is his first full-length novel.

4 Comments on “The Watchers by A.M. Shine #bookreview #horror”