Wish You Were Gone by Kieran Scott #bookreview #thriller 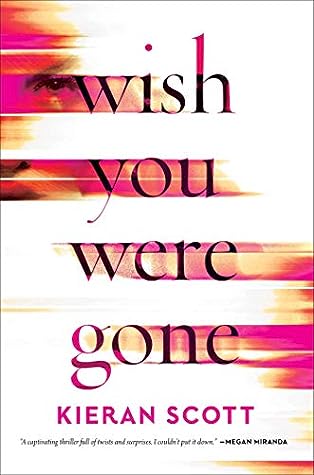 Title: Wish You Were Gone

For fans of the Netflix hit original series Dead to Me comes “a captivating thriller” (Megan Miranda, New York Times bestselling author) about what happens when the death of a husband and father isn’t the tragedy everyone believes.

Emma Walsh’s looks-great-on-the-outside marriage is at the breaking point, and she’s finally worked up the courage to confront her husband James about his drinking—his alcoholic rages, his blackouts, the uncertainty and fear his behavior has created for her and their two kids. But James never shows up to meet her as planned, and all her righteous words go unsaid. And unsaid they remain, because the next time Emma sees James, his body is crumpled amidst the wreckage of his flashy car, smashed to its final resting place halfway through the back wall of their suburban house’s roomy garage.

In the aftermath of the fatal crash, she and her teenage children, Kelsey and Hunter, begin to imagine life without the looming, volcanic presence of their husband and father. Buoyed by the support of her two closest friends, Emma struggles to deal with her grief, complicated by the knowledge that James’s legacy as an upstanding business owner and family man shines only because so many people were so willing, for so long, to keep his secrets—secrets that twist into new and unexpected shapes as the mysterious details of his last day of life begin to come to light.

Wish You Were Gone by Kieran Scott is a thriller novel. This one is told by changing the point of view between multiple characters, I believe eight of them. It’s also a novel that is told in different times starting at the accident then having chapters going back to the events leading up to it.

Emma Walsh is one of those people that from the outside it looks like she has everything. A wonderful husband, great kids, nice home. But of course things are not always what you see from the outside. You see Emma is ready to tell her husband that she wants a divorce, that she is tired of his abuse and drunken antics, not only abuse of her but the children too. Just as Emma is about to break the news though her husband doesn’t show up for the meeting and later that night comes home drunk and kills himself running his car into the back of their garage. Is it wrong to feel relief?

Now the first thing I will say about Wish You Were Gone by Kieran Scott is that I know my description on the style of this one may sounds as if it might be confusing but it really wasn’t. Everything in the story is clearly marked and it didn’t take long at all to fall right into the story with each character standing out on their own. I picked this one up with it’s comparison to Dead to Me loving that show and I can see that comparison but the story definitely had it’s own flavor which kept the pages turning the entire time I read. If this one sounds good to you I’d definitely say give it a shot.

Kieran Scott has written more than fifty novels for children and teens, eight of which have been New York Times bestsellers. She is an executive editor of children’s fiction and lives with her family in New Jersey. Wish You Were Gone is her first adult novel.