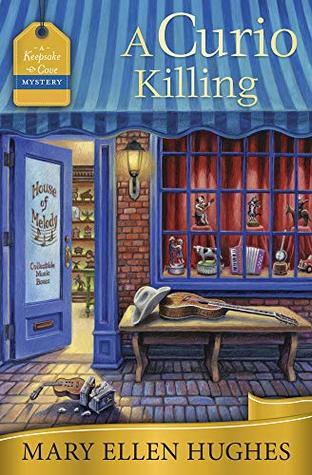 Callie Reed is looking forward to her first Keepsake Cove spring festival. But her excitement dims considerably when she learns that her ex-boyfriend, Hank, will be performing with one of the hired country-western bands. Callie vows to keep her distance, but that changes when the band’s manager, Bobby Linville, is found dead, killed with the music box Hank bought at Callie’s shop.

Hank is soon singing a sad tune in a detention center with Callie his only lifeline. Though thoroughly aware of his many faults, she knows violence and murder aren’t in his blood. But that means one of her fellow Keepsake Cove residents must be hiding a dark secret―something Callie desperately needs to uncover.

A Curio Killing by Mary Ellen Hughes is the third book of the cozy Keepsake Cove Mystery series. Each book in the series is centered around it’s own mystery so they can be read as a standalone or in any order if choosing to do so. However there is some character building carried over from book to book for those who read from the beginning.

In the first book of the series Callie Reed had gone to visit her aunt Melodie in Keepsake Cove where her aunt owned a collectable music box store. However shortly after arriving Callie found her aunt murdered and with faint hints of help from a favorite music box Callie had to find a murderer.

Now Callie is settling into Keepsake Cove and running the shop she inherited from her aunt and settling into the community and it’s now time for the Keepsake Cove spring festival. Callie was excited for her first festival until she found out her ex, Hank, would be taking part with his band. However, when Hank’s band manager if found murdered Callie knows Hank couldn’t have been the killer regardless of all the faults Hank did have so Callie knows she once again must find a killer.

The Keepsake Cove Mystery series is another that I started at the beginning and have now read every book and really enjoyed them. When reading the first book of this series Keepsake Cove quickly became one of those charming little places that I wished I could visit with all of it’s specialty shops and cozy cottages. I really had grown fond of Callie along the way but it looks like this may be the last book of the series with the publisher now out of business and it looks as the author is now writing under another name, such a shame as it was a fun one.

Mary Ellen Hughes is the national bestselling author of the Keepsake Cove Mysteries (A Fatal Collection, A Vintage Death, and A Curio Killing) the Pickled & Preserved Mysteries (The Pickled Piper, License to Dill, and Scene of the Brine) the Craft Corner Mysteries (Wreath of Deception, String of Lies, and Paper-Thin Alibi) and the Maggie Olenski Mysteries (Resort to Murder, and A Taste of Death), as well as several short stories including The Woman on the Train.

She writes The Craft Fair Knitters Mysteries – beginning with A Wicked Yarn – under the pen name Emmie Caldwell.

A transplanted Wisconsinite, Mary Ellen lives and writes in Maryland. Visit her at http://www.maryellenhughes.com