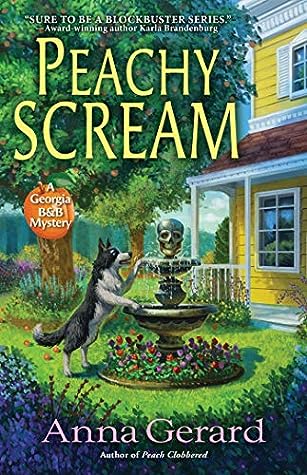 To die, or not to die? Georgia B&B proprietor Nina Fleet turns amateur thespian to bring the curtain down on a Shakespearean actor’s killer.

It’s nothing short of inevitable that Cymbeline, GA, hosts an annual Shakespeare festival. But stage-struck Nina Fleet is about to learn that putting on an amateur theatrical production can be murder. Nina’s anticipating showbiz glamour and glitz when a community Shakespearean troupe arrives for a two-week stay at her B&B. But the lights dim when she learns the company’s director is her nemesis, struggling actor Harry Westcott–who still claims to be the rightful heir to Nina’s elegant Queen Anne home.

Meanwhile, the troupe members are not content to leave the drama upon the stage. Accusations of infidelity and financial malfeasance make a shambles of rehearsals. And then, two days into the troupe’s stay, the lead actor is found dead in Nina’s formal Shakespeare garden. Natural causes…or murder most foul?

Nina uncovers evidence that something is indeed rotten in the town of Cymbeline. Too bad Harry is the only one who believes that she’s not going completely off script. And exposing the truth isn’t easy when the remaining troupe members say the show must go on…particularly when all of them seemingly had a motive for wanting their fellow actor to permanently exit stage right. Determined to keep the killer from making a curtain call, Nina and her trusty Australian Shepherd, Matilda, join forces with Harry to sleuth out the murder plot. Will they succeed before someone else shuffles off this mortal coil? Find out in Anna Gerard’s delightful second Georgia B&B mystery.

Peachy Scream by Anna Gerard is the second book in the cozy A Georgia B&B Mystery series. As with most cozy mystery series each book of the series has it’s own fully solved mystery within so they can be read as a standalone or in any order if choosing to do so. There is however some character development that carries over from book to book for those who follow from the beginning.

After her divorce Nina Fleet wanted to get away from the city and give herself a fresh start so when she found a historic Queen Anne house in quaint Cymbeline, GA. Nina immediately put in an offer for the home with her long term plan being to open a Bread and Breakfast and start a new life in the charming small town. After a rocky start to her new business Nina feels like things are finally going well.

Now with the annual Shakespeare festival in the small town Nina is hoping to fill up her B&B with guests for the two weeks.  Nina really didn’t expect one of those guests to be Harry Westcott, the man who gave Nina problems over the sale of her new home.  However, when the lead actor ends up murdered Harry is the only one that believes in Nina’s theories and teams up with her to help catch a killer.

Having read both books in the A Georgia B&B Mystery series I have come to find that the stories certainly have a lot going on in them. Regardless though these are still easy to follow cozies with fun characters in a lovely small town setting which is just the type of cozy that I enjoy. With also another great mystery to follow in this second book I will definitely look forward to the next in the series.

Anna Gerard is an experienced author who specializes in cozy mysteries with a southern twist. A Native Texan, she received a degree in journalism from the University of Oklahoma. The president of the Florida chapter of Mystery Writers of America, she enjoys reading, landscaping, and selling vintage goods on Etsy. She currently resides in the boonies of Florida.