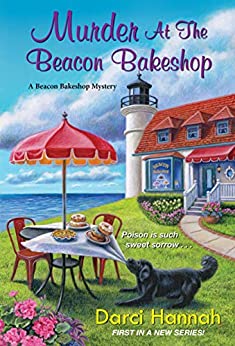 Title: Murder at the Beacon Bakeshop

After catching her celebrity chef fiancé sizzling in the arms of another woman, Lindsey Bakewell left big city Wall Street for small town Beacon Harbor, Michigan to pursue her own passion as a pastry baker—and gets mixed up in someone’s sweet taste of revenge . . .

More interested in kneading dough than adding it up, Lindsey’s breakup inspired her to set up the shop she always wanted in a place that always made her happy. She’d spent many childhood summers near this beach community and converting the old run-down lighthouse into a bakery café and home offers a perfect fresh start for Lindsey and her devoted Newfoundland dog, Wellington.

But not everyone in town has a sweet tooth. The preservation society won’t have the lighthouse’s history sugar coated by lattes and cakes—and a protest group crashes Lindsey’s Memorial Day opening. Then her ex-fiancé Jeffrey Plank and his girlfriend Mia Long arrive to trash the place. In the ensuing chaos Mia chokes on a donut and dies.

An autopsy reveals cyanide in Mia’s bloodstream and Lindsey is the police’s prime suspect. To clear her name, she’s going to need to combine ingredients found in the town’s checkered past to uncover the identity of a desperate killer . . .

Lindsey Bakeswell has that “safe” career that she thought she should have and a boyfriend that she thought may have been the one. When Lindsey’s relationship crumbles when she catches her celebrity chef boyfriend with another woman she decides to ditch the safe career and follow her dreams of owning her own bakeshop. Lindsey packed up and moved to her childhood vacation destination of Beacon Harbor, Michigan where she bought the old lighthouse intending to convert it into a bakery/home for herself and her dog, Wellington.

Lindsey’s dream isn’t without a lot of conflict though in her new home. Welly doesn’t exactly make a good impression with Lindsey’s new sexy neighbor, the town preservation society also isn’t happy with Lindsey “destroying” town history by converting the rundown lighthouse and turning it into a shop. And on top of it all Lindsey never expected to be sharing her lighthouse with a ghost! But though it all Lindsey manages to get her bakeshop up and running only to have a protest group come crashing in on her big opening. Amidst all the chaos Lindsey’s ex and his new gal pal, Mia,  also crash the party only to end up with Mia murdered and Lindsey the prime suspect.

Darci Hannah was not a new cozy author to me, I had read her A Very Cherry Mystery series and had really enjoyed it so when I saw this new series I knew I had to give it a shot. Just as I had found before the Beacon Bakeshop series was full of laughs and plenty of fun which I absolutely adore. The setting in this one is wonderful, a small beachy town which is always my favorite and being set up in the lighthouse with a creepy mysterious past was just that extra bit of fun I liked. After getting to know Lindsey, Welly and all the new cast of characters I will definitely be interested in returning to this series in the future. 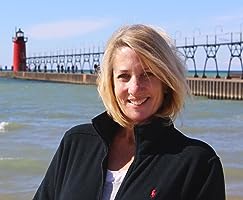 Cozy mystery author, Darci Hannah, is a native of the Midwest and currently lives in a small town in Michigan. Darci is a lifelong lover of the Great Lakes, a natural wonder that inspires many of her stories. When Darci isn’t baking for family and friends, hiking with her furry pals, Ripley and Finn, or concocting her next cozy mystery, she can be found wandering around picturesque lakeside villages with her hubby, sampling baked goods, and breaking for coffee more often than she should.

You can learn more about Darci and her books at http://www.darcihannah.com
Connect with Darci on Facebook: https://www.facebook.com/AuthorDarciHannah