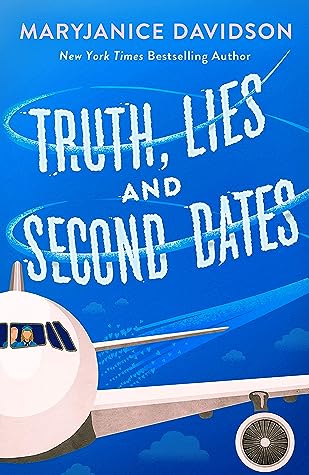 Captain Ava Capp has been flying from her past for a decade. She’d much rather leave it, and her home state, behind forever. But when she finds herself back in Minnesota, against her better judgment, everything goes sideways in a way she never expected it to.

M.E. Dr. Tom Baker has never forgotten Ava and the cold case she ran away from. When she shows up unexpectedly in town, in spite of himself, sparks fly. Which is terrible because he can’t stop his growing attraction to her. Can these two Type-A’s let their guards down and work together to put Ava’s tragic past behind her for good? And keep their hands off each other at the same time?

Truth, Lies, and Second Dates by MaryJanice Davidson is the third book in the contemporary romance Danger series. As with a lot of romance series the books in the Danger series change the main characters in each book so they can be read as a standalone if choosing to do so. This third book of the series definitely had an element of mystery to it too even though the romance is the main focus.

Ava Capp is a Captain in the airline industry which is a suiting career for her since she had every intention of getting as far away as fast as she could from her hometown ten years ago. Now after a decade of distance though Ava finds herself landing back in Minnesota and it isn’t long before she comes across Dr. Tom Baker. Tom of course remembers Ava and the reason she left. Could Tom help Ava put the cold case that drove her away finally to rest?

When I first picked up Truth, Lies, and Second Dates I did not know that it was part of a series. While reading this one I always had the feeling that I had been dropped into a story that I didn’t quite know. Looking back I saw that the other books had different characters so I couldn’t put my finger on if this installment just needed a bit more depth or if I had missed an introduction from an earlier read. The characters were likable enough and I did enjoy having a mystery involved in the background but overall I would put this one at three and a half stars thinking it did need a bit more of something to really love.

MaryJanice is the best-selling author of several novels and is published across multiple genres, including the UNDEAD series and the BOFFO trilogy. Her books have been published in over a dozen languages and have been on best-seller lists all over the world, including USA Today and the New York Times. She has published books, novellas, articles, short stories, recipes, and rants, and currently writes a bi-weekly column for USA Today.

A former model and medical test subject, she lives in St. Paul, MN, with her husband, children, and dogs. You can reach her at contactmjd@comcast.net, find her on Facebook at https://www.facebook.com/maryjanicedavidson, follow her on Twitter at https://twitter.com/MaryJaniceD, and check out her blog (updates coming soon!) at http://maryjanicedavidson.blogspot.com/.