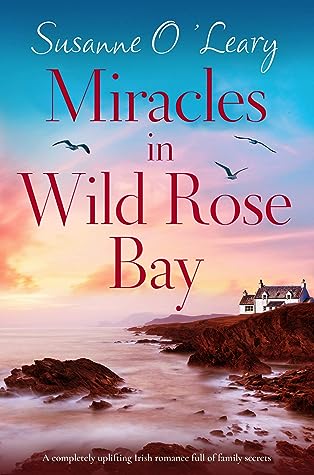 A truly unforgettable Irish romance set on the shores of the Wild Atlantic Way.

Arriving in Sandy Cove to views of the shimmering ocean, Tara O’Rourke is excited to get to work. She’s been sent from New York City to take photos of Ireland for a travel magazine, and she knows the perfect area to visit: the mysterious, picturesque Wild Rose Bay.

Staying in her sister Kate’s sweet little cottage, the long nights and beach strolls inspire Tara. But Kate isn’t pleased with Tara’s assignment: she doesn’t want the untouched beauty of the area spoiled by tourists. And when Tara ignores Kate and heads out on her own, she encounters more opposition from Kate’s handsome friend Mick O’Dwyer.

Despite their differences, Tara soon finds herself captivated by Mick, and as he helps her research the area, they uncover a tumbledown farmhouse that holds a secret about Tara’s family. Soon Tara is forced to make a choice: should she give up her story and the career she’s always wanted, or the man and the country she’s falling in love with?

The ultimate escape to beautiful Ireland. Totally captivating from the first page to the last, Miracles in Wild Rose Bay is perfect for fans of Sheila O’Flanagan, Debbie Macomber and Mary Alice Monroe.

Miracles in Wild Rose Bay by Susanne O’Leary is the sixth book in the contemporary romance Sandy Cove series. As with a lot of romance series each book in the Sandy Cove series changes the main characters so each can be read and understood as a standalone if choosing to do so. However, for those following from the beginning there are glimpses of previous characters in each new book of the series, especially with this new addition to the series the new lead is the sister of the lead in book five and she has come to visit.

Tara O’Rourke has been in a rather dead end relationship that seems to be going nowhere with a man who refuses to think of settling down. When Tara is offered a photography job to travel to Ireland and feature the Wild Atlantic Way she jumps at the opportunity to not only take time to reflect on her relationship but to visit her sister in Sandy Cove.

Shortly after Tara arrives in Sandy Cove her flighty boyfriend breaks it off but she refuses to let it get her down and focuses on doing a wonderful job with her photos and story. Tara also stumbles onto an old photograph of her great-grandfather which leads her on a mission to discover more about her family history while she’s in Ireland with the help of her sister and family friend Mick O’Dwyer.

I have been following the Sandy Cove series since it began and have fallen in love with the quaint little town on the Irish coast and the people I meet in each installment. This latest had a bit of mystery with the past Tara was looking to uncover and a lot of the Irish coast. I would say though it could have used a bit more romance between Tara and Mick for those that join the series for the relationships but I didn’t mind too much and left this one at four stars.

Susanne O’Leary is the bestselling author of more than twenty novels, mainly in the romantic fiction genre. She has also written three crime novels and two in the historical fiction genre. She has been the wife of a diplomat (still is), a fitness teacher and a translator. She now writes full-time from either of two locations, a ramshackle house in County Tipperary, Ireland or a little cottage overlooking the Atlantic in Dingle, County Kerry. When she is not scaling the mountains of said counties, or keeping fit in the local gym, she keeps writing, producing a book every six months.