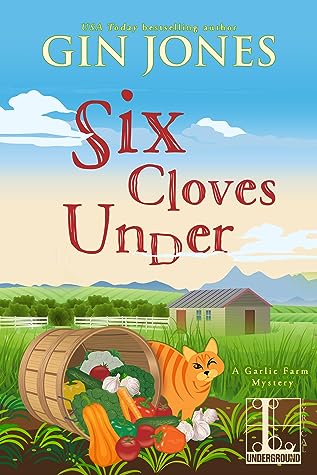 App developer Mabel Skinner is about to discover something rotten on her late aunt’s garlic farm—and it’s not the compost heap . . .

Mabel doesn’t know a stinkin’ thing about garlic farming. She knows how to develop an app and how-to code. But when her aunt, Peggy Skinner, dies suddenly, Mabel inherits her Stinkin’ Stuff Farm in western Massachusetts. She arrives during peak harvest time—with three days to bring in the entire crop before rain can destroy it.

But Mabel has an even bigger problem: she suspects her aunt’s “accidental death” was murder. As she digs for both garlic and clues, Mabel must contend with a mysterious crop thief, a rival garlic grower her aunt was suing, and a farmer who was after Aunt Peggy’s green-thumb secret. It’s up to Mabel to crack the code on a killer, before she joins the garlic bulbs six cloves under . . .

Six Cloves Under by Gin Jones is the first book in the cozy A Garlic Farm Mystery series. As with most cozy series this first book has it’s own mystery that is fully solved within the book so it can be read as a standalone without a cliffhanger. There will be however the character development that carries over from book to book for those that follow the series from the beginning.

Mabel Skinner got so caught up in her job as an app developer and with life in general that she hasn’t been to visit her Aunt Peggy Skinner in years falling back on sending the occasional card. It still hits Mabel hard when she gets news of Aunt Peggy’s passing since her aunt had always been in good health working hard on her garlic farm.

Mabel packs a bag and finds herself heading to western Massachusetts when it’s found that Aunt Peggy left the Stinkin’ Stuff Farm to Mabel. Mabel only plans to get the farm ready for sale but soon finds herself in the middle of the garlic harvest with Peggy’s friends and neighbors jumping in to help. Before long though Mabel begins to doubt the story she was told of Aunt Peggy dying in an accident and finds herself looking in every corner for a murderer.

Who knew people went so crazy for garlic? I certainly didn’t until reading this opener in the A Garlic Farm Mystery series. This one was filled with quirky and fun characters with somewhat introverted app developer Mabel. It also had a favorite of mine with cute critters all around including a helpful alarm of a kitty. I also liked that this first book of the series dealt with the death of Mabel’s aunt instead of her arriving to another dead body. So when it was all said and done I’ll definitely return to Stinkin’ Stuff Farm with book two.

Gin is a retired lawyer who specialized in ghost-writing for other lawyers. She prefers to write her own books, though, since she doesn’t have to worry that her sense of humor might get her thrown into jail for contempt of court. In her spare time, Gin makes quilts, grows garlic, and advocates for patients with rare disorders.