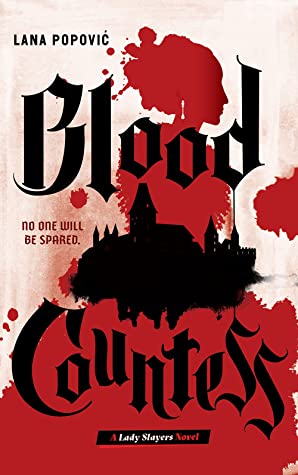 In 17th century Hungary, Anna Darvulia has just begun working as a scullery maid for the young and glamorous Countess Elizabeth BaÌ?thory. When Elizabeth takes a liking to Anna, she’s vaulted to the dream role of chambermaid, a far cry from the filthy servants’ quarters below. She receives wages generous enough to provide for her family, and the Countess begins to groom Anna as her friend and confidante. It’s not long before Anna falls completely under the Countess’s spell—and the Countess takes full advantage. Isolated from her former friends, family, and fiancé, Anna realizes she’s not a friend but a prisoner of the increasingly cruel Elizabeth. Then come the murders, and Anna knows it’s only a matter of time before the Blood Countess turns on her, too.

Blood Countess by Lana Popović is the first book in the young adult historical horror fantasy Lady Slayers series. This novel is based off the real life Countess Elizabeth Baathory who was the inspiration for Countess Dracula told from the point of view of her maid. While this is a horror fantasy series each of the books are about different characters in history so it seems that they could be read as standalones if choosing to do so but I’ve only read the first book so I can’t say for sure.

Anna Darvulia was training to be a midwife and healer but then tragedy strikes her family that forces Anna to give up her healing. Anna takes a job as a scullery maid instead working for the Countess Elizabeth Bathory. Before long Anna earns her way in the countess’ trust and moves up rank to her chambermaid where she finds herself falling under the spell of Countess Elizabeth and becoming her confidant.

Blood Countess for me was the type of book that started off strong but didn’t quite hold that all the way through. I wondered if perhaps the pace seemed to slow down for me after a while because this one wasn’t quite as bloody and horrific as it sounded like it would be and seemed to focus more on the relationship and also got a little repetitive in the middle. I ended up landing on three and a half stars for this opener of the series, I enjoyed it more than I thought but wish the pace had kept up as well as the beginning felt all throughout the book.

Lana Popovic is the author of Blood Countess, Wicked Like a Wildfire, and Fierce Like a Firestorm. Born in Serbia, she lived in Hungary, Bulgaria, and Romania before moving to the United States, where she studied psychology and literature at Yale University, law at Boston University, and publishing and writing at Emerson College.