The Boy in the Photo by Nicole Trope #bookreview #thriller 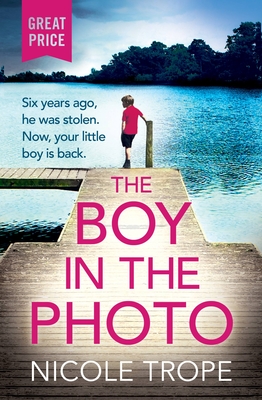 Title: The Boy in the Photo

Read the chilling and completely heartwrenching story of a mother’s worst nightmare: her child being stolen—and what happens when he returns.

Megan waits at the school gates for her six-year-old son, Daniel. As the playground empties, panic bubbles inside her. Daniel is nowhere to be found. Her darling son is missing.

After years of sleepless nights and endless days of missing her son, Megan finally gets the call she has been dreaming about. Daniel has walked into a police station in a remote town just a few miles away.

Megan is overjoyed—her son is finally coming home. She has kept Daniel’s room, with his Cookie Monster poster on the wall and a stack of Lego under the bed, in perfect shape to welcome him back. But when he returns, there is something different about Daniel . . .

According to the police, Daniel was kidnapped by his father. After his dad died in a fire, Daniel was finally able to escape. Desperate to find out the truth, Megan tries to talk to her little boy—but he barely answers her questions. Longing to help him heal, Megan tries everything—his favourite chocolate milkshake, a reunion with his best friend, a present for every birthday missed—but still, Daniel is distant.

And as they struggle to connect, Megan begins to suspect that there is more to the story. Soon, she fears that her son is hiding a secret. A secret that could destroy her family . . .

The Boy in the Photo by Nicole Trope is a thriller novel centered around a mother’s worst nightmare, her child being taken. The book is told from two different timelines of the past and the present.

Six years ago Megan was adjusting to being a single mother after divorcing her controlling and abusive husband. One day Megan goes to the school to wait for her six year old to be dismissed only to find that he was already gone from the school. Police determined Daniel had been taken by his father leaving the country and vanishing without a trace.

Now, six years later, Megan has finally began living her life again after years of living in limbo hoping and praying for her son’s return. Megan had gotten close to the detective assigned Daniel’s case and the two had married having a daughter together. When the phone call comes in the Daniel has been found Megan is overjoyed but hesitant about now having a twelve year old she does not know at all.

Having read Nicole Trope before I expected this book to have wonderful writing and sure enough it did pull me right into the story and was easy to follow as it switched between telling the story in both timelines. The one thing that brought my rating down though was I knew right away how the story would work out in the end so when it all wrapped up there were no real twists or surprises for me with it being so easy for me to work out. Since I did find it engaging and flew through the pages until I got to the end I gave the story three and a half stars despite guessing the outcome.

Nicole Trope went to university to study Law but realised the error of her ways when she did very badly on her first law essay because-as her professor pointed out- ‘It’s not meant to be a story.’ She studied teaching instead and used her holidays to work on her writing career and complete a Masters’ degree in Children’s Literature.
The idea for her first published novel, The Boy under the Table, was so scary that it took a year for her to find the courage to write the emotional story. She went on to publish a further five novels in Australia before joining Bookouture in 2019. She is a USA Today and Amazon bestseller in the USA, UK, AUS and CAN.
She lives in Sydney with her husband and three children