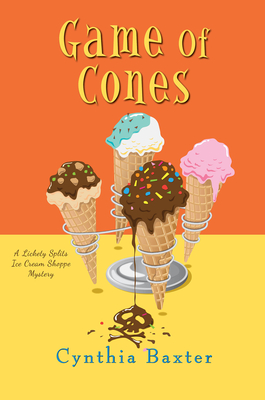 As stormy weather puts a freeze on business at Lickety Splits, Kate McKay doesn’t waffle around scooping up new clientele at a historic hotel. But her hopes of becoming the Hudson Valley’s reigning ice cream queen melt fast when murder checks in . . .

From the moment Kate arrives at the imposing Mohawk Mountain Resort, not even luggage brimming with hot fudge can sweeten her stay. Instead of savoring alone time with her on-again boyfriend Jake and leading workshops on whipping together delectable frosty treats, she finds herself stranded at the isolated hotel with a small group of nutty characters—and a dead body.

When the corpse of wealthy cosmetics executive Bethany La Montaigne is suddenly found following a blackout, any of the five strangers trapped with Kate and Jake could be the killer. Chilled to the core, Kate vows to discover whether the victim’s mortal enemy was a smooth-talking playboy, bubbly millennial, mousy librarian, charming Englishman, or the Mohawk’s creepy general manager . . .

Bethany’s life was chock full of scandals and there’s little doubt that someone refused to endure another taste. With just a sprinkling of clues, it’s up to Kate to bring justice to a culprit who believes that revenge is a dish best served cold . . .

Game of Cones by Cynthia Baxter is the fourth book in the cozy A Lickety Splits Mystery series. Each book in the series does contain it’s own mystery that will be solved so they can be read as a standalone or in any order if choosing to do so. However, for those that follow the series from the beginning there will be some character development that carries over from book to book.

In this series Kate McKay had left her hometown after high school and had gone onto college and then a career in Manhattan. However, when Kate received news that her grandmother needed someone to come care for her Kate quickly returned to Wolfert’s Roost near the Hudson Valley, giving up her career. Once back in her hometown Kate decided she would follow her dream of opening her own ice cream shop to begin a new career path.

Kate’s business had been booming but now that colder weather has arrived she sees a need to drum up some new customers. Kate decides to head to Mohawk Mountain Resort to hopefully gain some new business but as soon as Kate arrives she finds herself alone with only a handful of guests. Unfortunately for Kate her habit of stumbling onto murders happens again when after a blackout the body of a wealthy guest, Bethany La Montaigne, appears leaving Kate to find yet another killer.

I have been following the A Lickety Splits Mystery series since the beginning and have found that I rather enjoyed each book that comes along. I think of this one as my don’t judge a book by it’s cover read because I wasn’t a huge fan of the covers on these compared to a lot of cozies but the characters and setting are very enjoyable so I remain glad I took a chance on them. This one moved the story to a isolated hotel and gave a nice spooky vibe to the setting. Also, one thing in this series that I love is at the beginning of every chapter there are brief facts listed on ice cream and I thought that was a cute addition to include to highlight the series.

Cynthia dreamed of being a writer ever since she was six years old and discovered that she loved books and reading more than anything else.

She grew up on Long Island, New York, graduated from Bryn Mawr College, got an MBA from the Sloan School at MIT, and spent three and a half years working for large corporations—and hating every minute. She was therefore thrilled when she got her first book published at age 27 and decided to try writing full-time.

Cynthia has also written more than forty novels under the name Cynthia Blair. And books and reading are still her favorite things in the world.