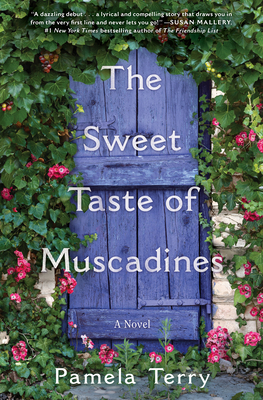 Title: The Sweet Taste of Muscadines

A woman returns to her small southern hometown in the wake of her mother’s sudden death—only to find the past upended by stunning family secrets—in this intimate debut novel, written with deep compassion and sharp wit.

Lila Bruce Breedlove never quite felt at home in Wesleyan, Georgia, especially after her father’s untimely demise when she was a child. Both Lila and her brother, Henry, fled north after high school, establishing fulfilling lives of their own. In contrast, their younger sister, Abigail, opted to remain behind to dote on their domineering, larger-than-life mother, Geneva. Yet despite their independence, Lila and Henry know deep down that they’ve never quite reckoned with their upbringing.

When their elderly mother dies suddenly and suspiciously in the muscadine arbor behind the family estate, Lila and Henry return to the town that essentially raised them. But as they uncover the facts about Geneva’s death, shocking truths are revealed that overturn the family’s history as they know it, sending the pair on an extraordinary journey to chase a truth that will dramatically alter the course of their lives. The Sweet Taste of Muscadines reminds us all that true love never dies.

The Sweet Taste of Muscadines by Pamela Terry is a women’s fiction novel that is full of family secrets giving this contemporary a touch of suspense. Seeing that I love novels full of family drama and secrets I picked this one up thinking it would be right up my alley.

Lila, her brother Henry and their little sister Abigail grew up in the southern small town of Wesleyan, Georgia with their over the top mother, Geneva. As soon as they could after school Lila and Henry took off away from the town and their mother heading north where they stayed rarely thinking of the home they left behind.

One day however Lila gets a call that no one wants to hear and that is that Geneva has passed. The strange thing though was she was found out behind the family home near the muscadines. As Lila and Henry head back to their small town they weren’t prepared for what they would find when secrets begin surfacing.

The Sweet Taste of Muscadines is another case of finding myself in the minority when I look around at other reviews for this novel. When I finished I had one of those cases of feeling a bit meh as the book felt very slow moving to me which is the type that I have a hard time getting into. The story was fine but normally family secrets draw me in and have me completely engaged but this one was easy to put down and take a break from. I’d say if this one sounds good to you to form your own opinion though especially if not minding a more slow burn pace.

A lifelong Southerner, Pamela Terry learned the power of storytelling at a very early age. For the past decade, Terry has been the author of the internationally popular blog From the House of Edward, which was named one of the top ten home blogs of the year by London’s The Telegraph. She lives in Smyrna, Georgia, with her songwriter husband, Pat, and their three dogs, Apple, Andrew, and George. She travels to the Scottish Highlands as frequently as possible and is currently at work on her second novel.