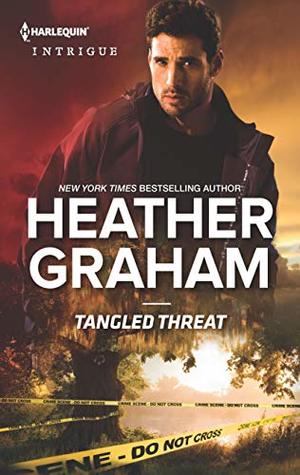 Some things you can’t forget.

A body hanging from the infamous History Tree unraveled their teenage love. Now Maura Antrim is again tangled up with Brock McGovern. Twelve years later, they’re back where that murder occurred—where Brock had been arrested and then released, where Maura had run, too scared to stand by his side. But with two women missing, and Brock now an FBI agent, Maura is determined to help. Together, they’ll have to confront a threat that never died and see if their passion has withstood the test of time.

Tangled Threat by Heather Graham is a romantic suspense book and I’ve become quite hit and miss with this genre. This story involved a second chance between the two main characters so I thought maybe it would be a real hit as I love romance characters with a history between them but alas that wasn’t the case.

Maura Antrim and Brock McGovern had been a couple twelve years before as they were both working at a resort. However when the pair had come across a dead body hanging from the what was known as the History tree the relationship quickly ended. Brock unfortunately was arrested for the murder of one of their co-workers and Maura’s parents quickly whisked her away from the deadly crime. Brock had been quickly cleared of the past crime and later went on to become an FBI agent.

Maura has now returned to the scene of that long ago murder being a video producer that has been working on a new project about historical macabre events. Maura never expected when she arrived at the resort she’d once worked at to find that Brock was also staying there now actually working a new crime of a mysterious disappearance.

Quite honestly for me I had a hard time getting into this story. The book is a short one and with trying to learn the past and present going on with these characters I never really felt myself caring about the couple or story the way I should with a suspense read. I personally chalked this one up to the fact that it was short it didn’t have enough depth to bring me really into the story leaving me to rate it at two and a half stars.

New York Times and USA Today bestselling author, Heather Graham, majored in theater arts at the University of South Florida. After a stint of several years in dinner theater, back-up vocals, and bartending, she stayed home after the birth of her third child and began to write. Her first book was with Dell, and since then, she has written over two hundred novels and novellas including category, suspense, historical romance, vampire fiction, time travel, occult and Christmas family fare.

She is pleased to have been published in approximately twenty-five languages. She has written over 200 novels and has 60 million books in print. She has been honored with awards from booksellers and writers’ organizations for excellence in her work, and she is also proud to be a recipient of the Silver Bullet from Thriller Writers and was also awarded the prestigious Thriller Master in 2016. She is also a recipient of the Lifetime Achievement Award from RWA. Heather has had books selected for the Doubleday Book Club and the Literary Guild, and has been quoted, interviewed, or featured in such publications as The Nation, Redbook, Mystery Book Club, People and USA Today and appeared on many newscasts including Today, Entertainment Tonight and local television.

Heather loves travel and anything that has to do with the water, and is a certified scuba diver. She also loves ballroom dancing. Each year she hosts the Vampire Ball and Dinner theater at the RT convention raising money for the Pediatric Aids Society and in 2006 she hosted the first Writers for New Orleans Workshop to benefit the stricken Gulf Region. She is also the founder of “The Slush Pile Players,” presenting something that’s “almost like entertainment” for various conferences and benefits. Married since high school graduation and the mother of five, her greatest love in life remains her family, but she also believes her career has been an incredible gift, and she is grateful every day to be doing something that she loves so very much for a living.