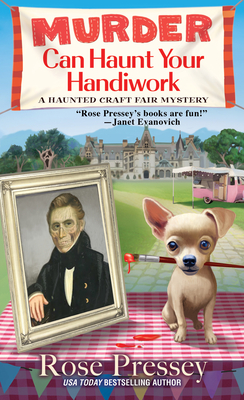 Title: Murder Can Haunt Your Handiwork

Rising up against the beautiful backdrop of the Blue Ridge Mountains, the Biltmore Estate is a magnificent mansion in Asheville, North Carolina, built as a summer home for George Washington Vanderbilt II–yes, of those Vanderbilts–during the Gilded Age. Nowadays, it’s the site of an annual craft fair. Unfortunately, it’s also about to become a crime scene…

Celeste is hard to miss as she pulls up with her pink and white Shasta trailer and adorable Chihuahua, Van Gogh–Van for short. But before she can show off her artwork at the fair, a tour guide is found strangled by a velvet rope barrier and a valuable painting goes missing. With a rogues’ gallery of sketchy suspects, Celeste welcomes the help of a pair of handsome detectives–and a ghost with a special interest in the case…

Murder Can Haunt Your Handiwork by Rose Pressey is the third book in the paranormal cozy Haunted Craft Fair Mysteries series. As with most cozy series each of the books in this series features it’s own mystery that will be fully solved within the book so each can be read as a standalone if choosing to do so. However, there is of course character building that carries over from book to book for those that follow the series from the beginning.

Celeste Cabot is an artist who has bought herself a small travel trailer in which she and her dog spend most of their time traveling from craft fair to craft fair. This allows Celeste the ability to spend her days painting as she sits in her booth outside the trailer at the fairs actually trying to sell her work to customers.One day at a fair however Celeste has a customer return one of her paintings claiming it is haunted and makes mysterious things happen. After investigating her paintings closer Celeste learns that there are hidden images within that she doesn’t purposely paint, weirder still somehow these paintings can summon ghosts.

Celeste has now travelled to Asheville, North Carolina where she has set up her trailer at the latest craft fair being held at a mansion known as the Biltmore Estate that has a beautiful backdrop of the Blue Ridge Mountains. Celeste doesn’t have much time to admire her new view though as again the craft fair has been plagued by murder when a tour guide has been found strangled. Not only has there been another murder but a painting at the fair has gone missing and Celeste has been visited by yet another ghost that is invested in solving the murder and theft.

I have followed the Haunted Craft Fair Mysteries series from the beginning since I am one that loves a good mixed genre read and this one has the touch of paranormal in the cozy setting with a ghost helping to solve the mysteries. Also, I love to find those quirky characters and settings for my cozies and this one has checked all of those boxes with some other fun elements of laughs, cute critters and an interesting mystery with plenty of suspects. This was another great addition to the series and I will look forward to coming back to this series again and again.

Rose Pressey is a USA TODAY bestselling author. She enjoys writing quirky and fun novels with a paranormal twist. The paranormal has always captured her interest. The thought of finding answers to the unexplained fascinates her.

When she’s not writing about werewolves, vampires and every other supernatural creature, she loves eating cupcakes with sprinkles, reading, spending time with family, and listening to oldies from the fifties.

Rose lives in the beautiful commonwealth of Kentucky with her husband, son and three sassy Chihuahuas.

Rose loves to hear from readers. If you want a free book from one of her top selling series, simply copy and paste the following into your browser:

And/Or join her on Facebook for lots of fun and prizes. https://www.facebook.com/authorrosepressey