Happily Ever After by Alison James #bookreview #thriller 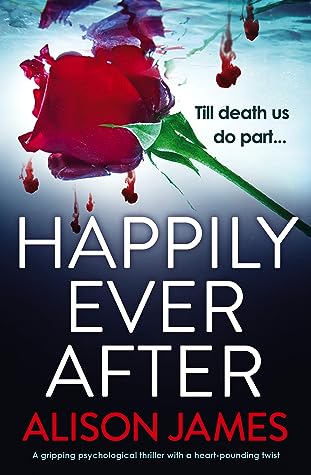 Title: Happily Ever After

At a luxury resort in the Maldives, two newlywed couples are on honeymoon. On the surface, they seem to have it all. But behind the filtered photos and fake smiles is the truth…

Tansy isn’t really in love.
Daniel is trying to escape the biggest mistake of his life.
Nikki’s past is catching up with her.
Arne’s heart is about to be broken.

They all have secrets. And before the honeymoon is over, their happiness will be shattered.

Because one of them is going to die…

This dark, addictive thriller will have you gripped until the final, shocking twist. Fans of Behind Closed Doors, The Guest List and The Wife Between Us will be hooked by the latest page-turner from US top five bestseller Alison James.

Have you ever read a book and found that small details in it completely changed your overall opinion of it? Happily Ever After by Alison James is a perfect case of that happening for me as I thought this thriller was one that I was completely going to love but instead found myself struggling to decide how to rate it in the end over a few minor details.

The book begins by introducing readers to Pippa who was just about to walk down the aisle when she had a moment of clarity that everything was just all wrong. Pippa had been with her soon to be husband for several years but had never really thought about marriage until friends pushed them into a wedding. Knowing that everything felt wrong Pippa called off the ceremony and then decided to take her already pre-paid honeymoon by herself to give herself a chance to think.

After arriving at the luxury resort in Mauritius Pippa feels out of place as she notices all the couples around her that seem to be doing the celebrating she had once thought she was going to be doing. At dinner Pippa notices two couples seated together, Arne and Nikki who seem very much and love and then Tansy and Daniel who seem to only appear happy when they know others are watching. Pippa soon meets another single man at the resort, James Cardle, and strikes up a friendship with the standoffish vacationer but one night Pippa and James come across a frantic scene as Nikki is found dead in Daniel and Tansy’s villa.

Now I honestly could toss out all the typical thriller descriptives of gripping and page turning etc as this book really did completely entrance me as I read. I absolutely loved Pippa and her sort of awkwardness being alone but finding herself as it went along. However, I came across some things towards the end that I just don’t know what the author was thinking writing it in this way. Without spoilers I will just say I did not agree with how Pippa went from a seemingly strong lead to not being one so much in my mind with a simple little addition that didn’t really make sense with how it ended. Anyway, I settled on three stars as I enjoyed most of this I just would have changed a few things I didn’t really care for at all.

20 Comments on “Happily Ever After by Alison James #bookreview #thriller”