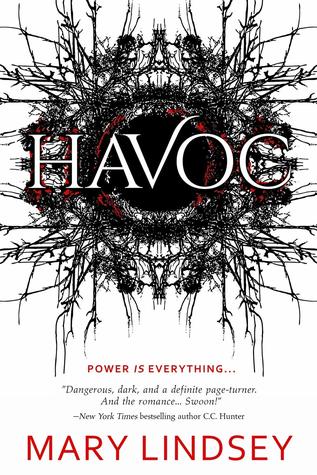 For the first time in his life, Rain Ryland belongs. He’s found a home with the wolf shifters of New Wurzburg and is no-holds-barred in love with Friederike Burkhart, their soon-to-be alpha. But the ascension to power is never easy for a new alpha, and challengers will come from an unlikely source—and bring into jeopardy not just Freddie’s position as alpha but her blooming relationship with Rain.

Rain has never shied away from a challenge—or a fight. And he’s ready to fight like hell for the woman he loves. But then a vision shows him that the biggest challenge of all to Freddie isn’t to her alpha status but against her life…and he’s the one who delivers the killing blow.

Havoc by Mary Lindsey is the second book in the young adult fantasy Haven series. The events in Havoc pick up shortly after where the first book of the series, Haven, left off. As this is a continuing story it is definitely better to start at the beginning and read from book one to get the full character and world building within this fantasy series.

The story began in Haven with Aaron “Rain” Ryland who had to grown up tough to survive life on the streets in the city with his mother. Nicknamed Rain early on after his mother said that Rain was the dark cloud that followed her in life Rain never expected to amount to much or succeed in life. When Rain’s mother passed away suddenly however Rain thought he’d been left all alone until a court ordered him to head to the small town of New Wurzburg to live with an aunt Rain never knew existed.

After arriving in New Wurzburg Rain found himself drawn to a group of kids that seemed to be on the outside of the rest of the students in school or more specifically Rain was drawn to Friederike Burkhart. There was just something different about Freddie, the tough as nails leader of the group of outsiders, that grabbed Rain’s attention. Freddie tried to warn Rain that danger surrounded her but Rain had never backed down from a challenge a day in his life and he’s was not about to start but he never expected that a whole new world would be found in this little town.

In my review of Haven I described this as a bit of Beauty and the Beast meets Twilight with a gender swapping tale that breaks all of the genre molds. It began much the same way as Twilight heading to the small supernatural infested town but forget the whimpy lead and swap in a street smart male. Since I actually did enjoy Twilight I didn’t mind the similarities and loved that the author did build her own little supernatural world in New Wurzburg with the Watchers and Weavers and thought at the end she definitely needed to continue to build on it as at the time it seemed a standalone but now we have Havoc. While this time around the story seemed to lack a bit of sparkle that the first had, I think because of the separation of Rain and Freddie maybe, I didn’t think this was quite five stars but it sure was fun going back to New Wurzburg and reading the what happened next for these characters. Not sure if this will continue after Havoc but I’m sure there could potentially be more things to come so I’d still love to come back again and expand on the story.

Mary Lindsey is a multi award-winning, RITA® nominated author of romance for adults and teens. Her books Shattered Souls and Fragile Spirits have been selected for the 2017 Spirit of Texas Reading Program.

Mary lives on an island in the middle of a river. Seriously, she does. When not writing, she wrangles her rowdy pack of three teens, two Cairn Terriers, and one husband. Inexplicably, her favorite animal is the giant anteater and at one point, she had over 200 “pet” Madagascar Hissing Cockroaches. The roaches are a long story involving three science-crazed kids and a soft spot for rescue animals. The good news is, the “pet” roaches found a home… somewhere else.

She loves to connect with readers and can be found at marylindsey.com and on Twitter at @MaryL_MarissaC