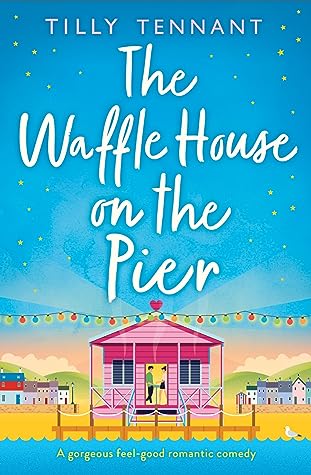 Title: The Waffle House on the Pier

Run away to Sea Salt Bay, where the sand is warm and soft, the sea is a perfect blue, and a candy-coloured waffle house is about to change Sadie’s life…

But when Sadie’s grandfather dies, leaving her grandmother without an anchor, Sadie must make a difficult decision. She quits her job and moves back home, determined to keep things going. The trouble is, she knows nothing about running a business, and learning at a million miles an hour with a shop full of hungry people isn’t easy. When she nearly burns the waffle house down, she has to admit she needs to get some help.

Her ex-boyfriend Declan promises to be there for her but Sadie worries that getting too close is a mistake – especially as he has a new girlfriend now. And anyway she’s just met newcomer Luke, with his gorgeous suntan and mellow voice…

Sadie’s family have always loved Declan and they’re not too sure about Luke, leaving Sadie unsure which way to turn. A terrible accident at sea forces her to look into her heart, but what if it’s already too late to tell the right man that she loves him?

If you love stolen kisses under the pier, walking along spray-capped shores eating ice cream, and books by Lucy Diamond, Jill Mansell and Jenny Colgan, you will fall in love with this romantic, heart-breaking read.

The Waffle House on the Pier by Tilly Tennant is a contemporary romance. Also, as much as there is romance this one is a bit of a journey of self discovery for the main character, Sadie.

As a teen Sadie thought she knew what she wanted and that was to get out of Sea Salt Bay and become a teacher. However, now as Sadie is training in the classroom with real students she’s not so sure of her choice as she doesn’t seem to be cut out to teach.

When Sadie’s grandfather suddenly passes away she finds herself thinking of making Sea Salt Bay her permanent home to help her grandmother run the Waffle House her grandparents have owned for years. Soon though she finds herself torn wondering if that is a mistake as her grandmother isn’t as young as she once was and as the business is not hard enough to run Sadie also has to watch the man she thought was the one with someone new.

Sea Salt Bay was such a lovely little place that I couldn’t help but love with the charming atmosphere and likable characters. I also couldn’t help but feel for Sadie as she stars seeing issues with her grandmother having had a grandmother diagnosed with alzheimers myself. It was also nice to watch as Sadie grew not only in her love life but in her professional life as well. 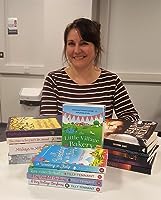 Tilly Tennant was born in Dorset, England, the oldest of four children, but now lives in Staffordshire in the heart of England with a family of her own. After years of dismal and disastrous jobs, including paper plate stacking, shop girl, newspaper promotions and waitressing (she never could carry a bowl of soup without spilling a bit), she decided to indulge her passion for the written word by embarking on a degree in English and creative writing, graduating in 2009. She wrote a novel in 2007 during her first summer break at university and has not stopped writing since. She also works as a freelance fiction editor, and considers herself very lucky that this enables her to read many wonderful books before the rest of the world gets them.

Hopelessly Devoted to Holden Finn was her debut novel; published in 2014 it was an Amazon bestseller in both the UK and Australia. It was followed by Mishaps and Mistletoe, The Man Who Can’t Be Moved, the Mishaps in Millrise series and the Once Upon a Winter series. In 2016 she signed to the hugely successful Bookouture with the first book of her Honeybourne series out June 2016. Find out more about Tilly and how to join her mailing list for news and exclusives at http://www.tillytennant.com