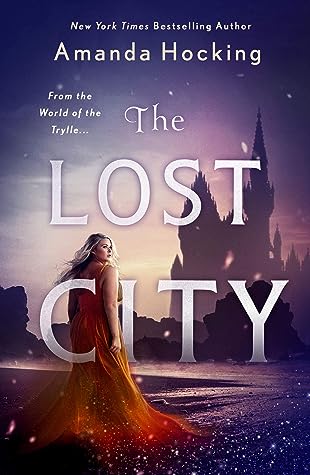 Amanda Hocking, the New York Times bestselling author of The Kanin Chronicles, returns to the magical world of the Trylle Trilogy with The Lost City, the first novel in The Omte Origins—and the final story arc in her beloved series.

The storm and the orphan

Twenty years ago, a woman sought safety from the spinning ice and darkness that descended upon a small village. She was given shelter for the night by the local innkeepers but in the morning, she disappeared—leaving behind an infant. Now nineteen, Ulla Tulin is ready to find who abandoned her as a baby or why.

The institution and the quest

Ulla knows the answers to her identity and heritage may be found at the Mimirin where scholars dedicate themselves to chronicling troll history. Granted an internship translating old documents, Ulla starts researching her own family lineage with help from her handsome and charming colleague Pan Soriano.

The runaway and the mystery

But then Ulla meets Eliana, a young girl who no memory of who she is but who possesses otherworldly abilities. When Eliana is pursued and captured by bounty hunters, Ulla and Pan find themselves wrapped up in a dangerous game where folklore and myth become very real and very deadly—but one that could lead Ulla to the answers she’s been looking for.

The Lost City by Amanda Hocking is the first book in the new young adult, urban fantasy The Omte Origins series. While this is a new series by this author it takes place within the same world from her Trylle series of the same genre.

Ulla Tulin is a young, nineteen year old, troll who has no idea who her family is since she was abandoned as a baby. The family who took her in told her all they new of the woman who left her one stormy night but those facts aren’t much to go on.

Since Ulla became a teenager she took a job with a family to be their live in nanny to help with their many children as Ulla finished growing up herself. The head of this family pulled a few strings to get her accepted into the Mimirin, an institution dedicated to learning of all of troll history giving Ulla the hopes of finding out about her family.

Now while I’ve read a few books by Amanda Hocking I have not yet read her Trylle series so going into this one I wasn’t familiar with that world. However, despite jumping into this as a new series and world to me it was easy to distinguish the world within since it’s an urban fantasy and very much mirrors our own world with a hidden world within.

The story flew by with not only the mystery of the main character’s family but with that of a girl she meets at the institute. The romance inside is light with plenty of room to build and all the characters were likable. I would also warn this one ends a bit abruptly leaving us on a cliffhanger but I will be looking forward to more answers in book two.

AMANDA HOCKING is the author of over twenty young adult novels, including the New York Times bestselling Trylle Trilogy and Kanin Chronicles. Her love of pop culture and all things paranormal influence her writing. She spends her time in Minnesota, taking care of her menagerie of pets and working on her next book.

← The Waffle House on the Pier by Tilly Tennant #bookreview #contemporary #romance
Cover Reveal: Revved To The Maxx by Melanie Moreland →