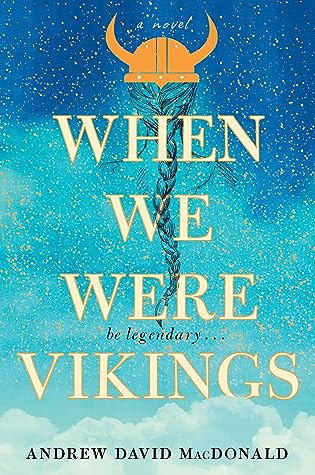 Title: When We Were Vikings

A heart-swelling debut for fans of The Silver Linings Playbook and The Curious Incident of the Dog in the Night-Time.

Sometimes life isn’t as simple as heroes and villains.

For Zelda, a twenty-one-year-old Viking enthusiast who lives with her older brother, Gert, life is best lived with some basic rules:

1. A smile means “thank you for doing something small that I liked.”
2. Fist bumps and dabs = respect.
3. Strange people are not appreciated in her home.
4. Tomatoes must go in the middle of the sandwich and not get the bread wet.
5. Sometimes the most important things don’t fit on lists.

But when Zelda finds out that Gert has resorted to some questionable—and dangerous—methods to make enough money to keep them afloat, Zelda decides to launch her own quest. Her mission: to be legendary. It isn’t long before Zelda finds herself in a battle that tests the reach of her heroism, her love for her brother, and the depth of her Viking strength.

When We Were Vikings is an uplifting debut about an unlikely heroine whose journey will leave you wanting to embark on a quest of your own, because after all…

We are all legends of our own making.

When We Were Vikings by Andrew David MacDonald is a young adult contemporary read. This book stands out from others in it’s genre by boldly having a lead character that suffers from Fetal Alcohol Syndrome which leaves her with cognitive differences which makes for quite a different coming of age contemporary read.

Zelda has always been obsessed with vikings with them being heroes in her eyes but day to day her brother, Gert, has been Zelda’s real life viking raising her on his own. Zelda is thrown though when she discovers Gert hasn’t been being completely truthful and may be up to some dangerous activities.

I have to say I thought Andrew David MacDonald did a wonderful job bringing day to day life alive for a character with cognitive differences. Zelda may have had been diagnosed with Fetal Alcohol Syndrome but I’m sure her character could resonant to other diagnosis such as Autism since there is also a wide spectrum of differences for each diagnosis. I couldn’t help but quickly begin to care for Zelda though and become completely engaged in her story and couldn’t wait for what would happen next so for me this was a great read!