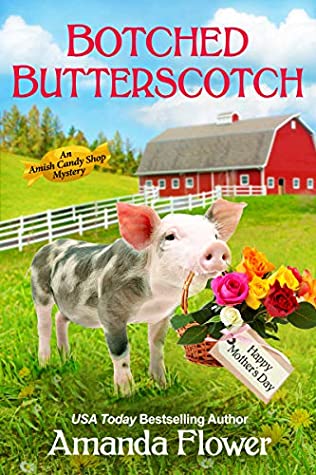 Mother’s Day is a sweet and busy time at the candy shop Bailey King runs with her Amish grandmother. This year is extra special, because Bailey’s parents are visiting Harvest, Ohio. Bailey’s father has rarely returned since leaving the Amish faith over thirty years ago, but Bailey is confident that the right treats can help sugarcoat any awkwardness. For Mother’s Day Tea at the local church, she’s whipping up her mom’s favorite: butterscotch fudge. All’s going well, until a sticky-fingered thief makes off with the money raised for a local women’s support group.

While Bailey tries to discover who stuck their fingers in the cookie jar, she encounters an assortment of suspects. It doesn’t help that Juliet, mother of Deputy Aiden Brody, is conspiring with Bailey’s mom to plan Aiden and Bailey’s wedding…though they’re not even engaged! Can Bailey find the culprit before events—both criminal and personal—boil over into disaster?

Botched Butterscotch by Amanda Flower is the second novella length book in the cozy Amish Candy Shop Mystery that also has five full length novels so far. Botched Butterscotch falls between books four and five of the series in chronological order but as with the other books of the series it has it’s own mystery solved within so it could also be read as a standalone if choosing to do so.  For those that follow from the beginning in the series though there is character building carrying over from book to book to tie them altogether.

The main character in this series, Bailey King, had been working in New York as a chocolatier before she decided to return to Harvest, Ohio and help her Amish grandmother run their family owned candy shop, Swissmen Sweets. While Bailey is not Amish herself she does find herself fitting into the community with her Amish roots and trusted more than other outsiders. This time around instead of a murder to solve Bailey gets asked to help catch a thief that has run off with money raised for a local charity.

Following this series from the beginning I’ve really enjoyed it overall as it has just that right mix of quirky fun and mystery. I loved how the author has taken a regular American and thrust her into the Amish world giving her the means to fit into both the regular community and Amish people. And as much as I like the characters there’s also plenty of cute critters stealing the show too. Now this go around has brought in Bailey’s parents to give even more depth to her character so a definite two thumbs up to this novella addition to the series!