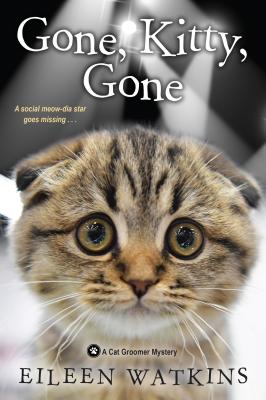 The fur is really going to fly when groomer Cassie McGlone drags in a catnapper . . .

With her new van, Cassie has expanded her Comfy Cat business to include mobile cat grooming. Next stop: a cat expo at a hotel just outside her hometown of Chadwick, New Jersey, where Cassie will give a grooming demo using shelter cats to encourage adoption while her veterinarian boyfriend Mark will offer a program on cat care and health.

The highlight of the expo will be a major cat show featuring pop sensation Jaki Natal. Almost as famous as his owner is her pet Gordie, a Scottish fold, who’s become a social media darling. But when adorable Gordie goes missing and his sitter is found murdered, Jaki is having kittens. While the cops are more interested in solving the murder of a human, Jaki insists Cassie help expose the catnapper and return gorgeous Gordie to the fold. Now it’s Cassie’s turn to solo as she plays a deadly game of cat-and-mouse with a culprit who’s not afraid to pounce . . .

Gone, Kitty, Gone by Eileen Watkins is the fourth book in the cozy A Cat Groomer Mystery series. Each book in the series has it’s own murder to be solved so they could be read as a standalone if choosing to do so. There is however a bit of character development that carries over from book to book for the fans who have read the entire series.

This series if centered around Cassie McGlone who had moved to the picturesque town of Chadwick to give herself a fresh start after leaving a horrible relationship. Cassie had opened her own shop, Cassie’s Comfy Cats, a cat grooming and boarding specialty boutique and had begun making a name for herself in the small town both for her unique business and cat knowledge and for becoming the town sleuth when murders occur.

Now in Gone, Kitty, Gone Cassie is making plans to attend a cat expo being held near her small town where she will demonstrate cat grooming while her boyfriend had a booth to  offer a program on cat care and health. However, once the expo is in full swing the lights go out and afterward a security guard is found in the stairwell, either the victim of a fall or foul play and the celebrity guest performer has her rare cat stolen.

A Cat Groomer Mystery series quickly became one that I really look forward to reading each book as they come along. The author has done a wonderful job with Cassie’s character and her knowledge of cats that even having owned cats my whole life I can still learn something new. There’s also always little reminders to bring a reader right back into the series without missing a beat and to keep a new reader on top of the character building. Wrap that up with a great mystery in each book and this is one I’d definitely recommend, especially to the kitty fans out there. 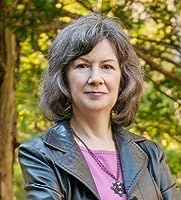 Eileen F. Watkins specializes in mystery and suspense fiction. In 2017 she launched the Cat Groomer Mysteries, starting with “The Persian Always Meows Twice,” from Kensington Publishing. “The Bengal Identity” and “Feral Attraction” followed in 2018. “The Persian Always Meows Twice” won the David G. Sasher Award for Best Mystery of 2017 at the Deadly Ink Mystery Conference, and received a Certificate of Excellence for 2017 from the Cat Writers’ Association, Inc.
Eileen previously published eight novels through Amber Quill Press, most of them paranormal suspense, as “E. F. Watkins.” These included her two Quinn Matthews Haunting Mysteries. The first, “Dark Music,” won the David G. Sasher Award in 2014. The second, “Hex, Death & Rock ‘n’ Roll,” was a Mystery finalist for the 2014 Next Generation EBook Awards.
Eileen is a member of Mystery Writers of America, Liberty States Fiction Writers and Sisters in Crime. She serves as publicist for Sisters in Crime Central Jersey and also for the annual Deadly Ink Mystery Conference. Eileen comes from a journalism background, having covered art, architecture, interior design and home improvement for New Jersey’s two largest daily newspapers. She also has freelanced on those subjects for major magazines. Besides these topics, Eileen has strong interests in the paranormal and spirituality as well as in animal training and rescue. She is seldom without at least one live-in cat, pays regular visits to the nearest riding stable and has competed in dressage. Visit her web site at http://www.efwatkins.com.