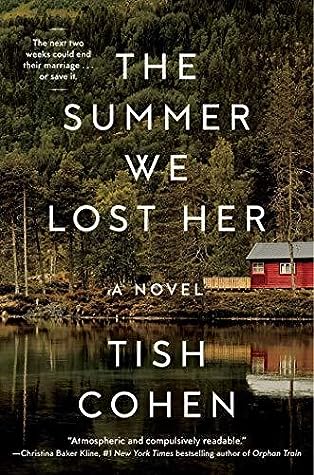 Title: The Summer We Lost Her

For fans of Jodi Picoult and Anna Quindlen, comes an “astonishingly profound…exquisitely written drama” (Caroline Leavitt, New York Times bestselling author of Pictures of You) about a husband and a wife, a missing child, and the complicated family secrets that can derail even the best of marriages.

It’s been a busy—and expensive—few years for Matt and Elise Sorenson and their young daughter Gracie, whom they affectionately call Little Green. Matt, a Manhattan lawyer, has just been offered a partnership, and Elise’s equestrian ambitions as a competitive dressage rider may finally vault her into the Olympics. But her long absences from home and endless hours of training have strained their relationships nearly to the breaking point.

Now they’re up in the Adirondacks, preparing to sell the valuable lakefront cabin that’s been in Matt’s family for generations. Both he and Elise agree it’s time to let it go. But as they navigate the memories the cabin holds—and come face to face with Matt’s teenage crush, now an unnervingly attractive single mother living right next door—Gracie disappears without a trace.

Faced with the possibility that they’ll never see their daughter again, Elise and Matt struggle to come to terms with what their future may bring. The fate of the family property, the history of this not-so-tiny town, and the limits of Matt and Elise’s love for each other are inextricably bound up with Gracie’s disappearance. Everything for the Sorenson family is about to change—the messy tangle of their past, the harrowing truth of their present, and whether or not their love will survive a parent’s worst nightmare.

The Summer We Lost Her by Tish Cohen is mostly a domestic drama story with the couple in question dealing with their marital issues. However, later on in the story there is a bit of a mystery added to it when their disabled daughter goes missing at a bus stop.

Matt and Elise Sorenson are the epitome of opposites attracting and the relationship working for them. Matt is an attorney in Manhattan who is on the verge of partnership with his firm while Elise is an equestrian who is a competitive dressage rider who has her eye on finally qualifying for the Olympics.

When Elise again misses another event and disappoints their daughter due to staying with her horse Matt really begins to question their marriage. For years Matt’s been the on making the sacrifices and even their daughter’s disability comes from an accident on a horse so some time away in the Adirondacks to sell some property is the time this couple needs to evaluate their marriage.

The Summer We Lost Her was a really slow burn when it came to pacing which for someone like myself that prefers faster took a lot of patience not to give up on. The drama had plenty of ups and downs with both partners showing their faults. The second half add even more with a bit of mystery although even that was mostly fuel for more drama. In the end I found this one to be an OK read leaving me to rate it at 3 1/2 stars.

Tish Cohen is the author of bestselling novels for adults and young readers, many of them in development for film. Her first novel, Town House, was a regional finalist for the Commonwealth Writers’ Prize for Best First Book. Cohen’s short film, Russet Season, had its US premiere at the San Diego Jewish Film Festival in 2017. She lives in Toronto.