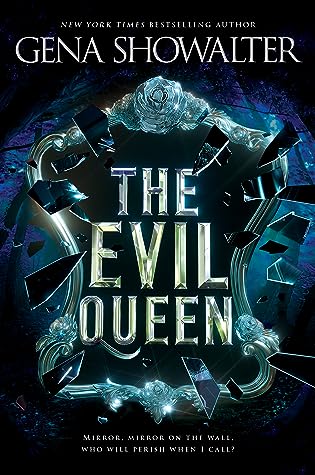 WELCOME TO THE FOREST OF GOOD AND EVIL.

Far, far away, in the realm of Enchantia, creatures of legend still exist, magic is the norm and fairy tales are real. Except, fairy tales aren’t based on myths and legends of the past—they are prophecies of the future.

Raised in the mortal realm, Everly Morrow has no idea she’s a real-life fairy-tale princess—until she manifests an ability to commune with mirrors.

Look. See… What will one peek hurt?

Soon, a horrifying truth is revealed. She is fated to be Snow White’s greatest enemy, the Evil Queen.

With powers beyond her imagination or control, Everly returns to the land of her birth. There, she meets Roth Charmaine, the supposed Prince Charming. Their attraction is undeniable, but their relationship is doomed. As the prophecy unfolds, Everly faces one betrayal after another, and giving in to her dark side proves more tempting every day. Can she resist, or will she become the queen—and villain—she was born to be?

The battle between good and evil is on.

The Evil Queen by Gena Showalter is the first book in the young adult fantasy The Forest of Good and Evil series. As one may guess from the title alone this is a retelling of Snow White in a sense that it takes readers way way back to give a background to the one we love to hate herself, the Evil Queen.

Once upon a time in the magical land of Enchantia fairy tales were not only stories but prophecies. At that time in Enchantia there was a law that all newly married women faced, if a woman was not with child within one year of marriage a husband had the right to end the marriage by having his wife beheaded.

One desperate queen at this time banded together with another queen, a princess, a witch and an oracle all in the same position to take from the Tree of New Beginnings to ensure their pregnancies. Legend had it that those babies coming from the tree would be cursed and doomed to a tragic end. After the babies came the oracle predicted they would one day play a part in Snow White and the  Evil Queen so in order to protect her Everly Morrow was sent to the mortal world but magic would eventually find her and bring her back to Enchantia.

As much as I love a good, creative retelling I was extremely hesitant to pick  this one up simply looking at the length and thinking and that’s only book one? Well, my fears actually did have merit as this was one of those fantasies that to me felt like it would drag on and on quite a bit. There is action and adventure along with some romance so I’m sure those that like slow builds will have more patience than I but for me I was a bit meh in the end wishing the creativity made up for the pace.

Gena Showalter is the New York Times and USA Today bestselling author of over fifty novels in multiple series, including the acclaimed Lords of the Underworld series, Angels of the Dark series, and the White Rabbit Chronicles. She writes sizzling paranormal romance, heartwarming contemporary romance, and engrossing YA novels.