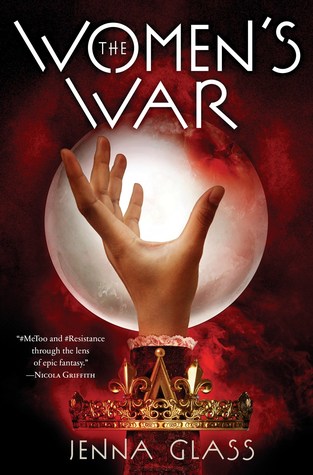 In a feminist fantasy epic, a revolutionary spell gives women the ability to control their own fertility—with consequences that rock their patriarchal society to its core.

When a nobleman’s first duty is to produce a male heir, women are treated like possessions and bargaining chips. But as the aftereffects of a world-altering spell ripple out physically and culturally, women at last have a bargaining chip of their own. And two women in particular find themselves at the liberating crossroads of change.

Alys is the widowed mother of two adolescent children, and the disinherited daughter of a king. Her existence has been carefully regulated, but now she discovers a fierce talent not only for politics but also for magic—once deemed solely the domain of men. Meanwhile, in a neighboring kingdom, young Ellin finds herself unexpectedly on the throne after the sudden death of her grandfather the king and everyone else who stood ahead of her in the line of succession. Conventional wisdom holds that she will marry quickly, then quietly surrender the throne to her new husband. Only, Ellin has other ideas.

The tensions building in the two kingdoms grow abruptly worse when a caravan of exiled women and their escort of disgraced soldiers stumble upon a new source of magic in what was once uninhabitable desert. This new and revolutionary magic—which only women can wield—might well tear down what is left of the patriarchy. The men who currently hold power will do anything to retain it. But what force in the world can stand against the courage and resolution of generations of women who have tasted freedom for the very first time?

The Women’s War by Jenna Glass is the first book in the epic fantasy Women’s War series. This is another book in which women have been treated as if they are property instead of equals along the lines of things like The Handmaid’s Tale or Vox.

In here though we start off meeting Alys who is the daughter of a King but her mother was exiled years before when the King decided he was finished with her so Alys has been disinherited. While visiting her mother in the awful place she had been living since her divorce Alys’ mother hints to something big coming for women and later that night she does cast a spell that releases the women of the land.

From that point of the spell taking place the book begins to switch the point of view between differing areas of the two kingdoms involved. Alys finds herself looking for answers to help her daughter, Ellis finds herself in line for the throne of her kingdom without a husband and then there’s the place in which Aly’s mother had been with those woman finding are not what they would seem.

I’m not sure I would even need to say to those that know me well that over five hundred pages of book I did find some places that really seemed to slow down and be in danger of losing my attention. I did like the idea overall of the world the author tried to create here and to be rather vague this was due to following the different classes and getting a point of view from all angles. Some of the content could be a brutal and might bother some but it wasn’t as bad as one could expect either, if that makes sense? So while I wasn’t completely wowed at the end I did enjoy this one and would give it 3.5 stars.

Jenna Glass wrote her first book—an “autobiography”—when she was in the fifth grade. She began writing in earnest while in college and proceeded to collect a dizzying array of rejections for her first seventeen novels. Nevertheless, she persisted, and her eighteenth novel became her first commercial sale. Within a few years, Glass became a full-time writer, and she has never looked back. She has published more than twenty novels under various names. The Women’s War marks her first foray into epic fantasy.

← You Owe Me a Murder by Eileen Cook @eileenwriter @HMHteen #bookreview #YA #thriller
Piece by Piece by R.H. Tucker blitz with giveaway →