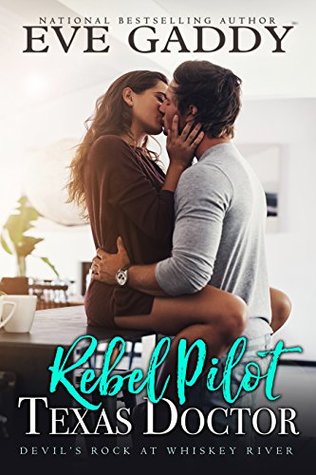 When Dr. Tobi Robinson returns to Whiskey River, Travis Sullivan is the only person to recognize that the smokin’ hot babe at the gala is actually his high school tomboy buddy. Time away has changed them both. Tobi, the prospective business major, became a doctor, while Travis, his pro baseball career ended by injury, converted his passion for flying into a charter flight business and flight school.

The easy friendship they enjoyed in high school soon deepens into desire and then love. But Tobi didn’t turn to medicine by chance—a horrific accident has left her unable to tolerate even approaching an airplane. As strongly as Travis draws her, Tobi isn’t sure she can ever trust her heart to a pilot. Can Travis convince the woman he’s discovered he can’t live without that their love can conquer every trauma?

Rebel Pilot, Texas Doctor by Eve Gaddy is the first book in the contemporary romance Devil’s Rock at Whiskey River series. It seems that this series is going to be featuring separate couples as most romance series tend to do as there is a definite ending to this first book and no cliffhanger.

Tobi Robinson has returned to her hometown of Whiskey River to take a job in the local clinic now that she is an established doctor. Tobi had been a bit of a tomboy growing up and she’s definitely changed her ways during her time away at school and establishing her medical career so all of those who knew her years ago have trouble recognizing her.

Travis Sullivan is the only one to recognize Tobi at first meeting but they were once best friends so it’s no surprise. Travis doesn’t know why Tobi had cut off their communication back in college but once the pair begin to talk they rekindle the old attraction neither knew the other had.

Rebel Pilot, Texas Doctor was a lovely little small town second chance romance. The characters were both very likable and being an animal love there was even a puppy to ooohhh and aaahh over. The thing that had me really liking this one was for once the angst involved in this romance was perfectly understandable. Tobi has an extreme fear of the one thing Travis does for a living so they really needed to work this out just as much as say a policeman or firefighter’s spouse would have those fears and I could really feel for them both. Great read that I’d recommend checking out. 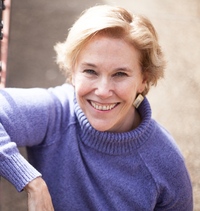 Eve Gaddy is the award winning, national bestselling author of more than twenty-five novels and novellas. Some of her latest releases include A Texas Christmas Reunion, The Redfish Chronicles, The Cowboy and the Doctor, Love Me, Cowgirl, and Last Shot.

For more news (and fun!) subscribe to her newsletter at http://bit.ly/Evenews

Eve loves her family, spring and fall in east Texas, the Colorado mountains, dogs, chocolate, books, and electronics. She enjoys cooking except when she is writing, and has been known to tell her husband that is what takeout was created for.