Grump: The (Fairly) True Tale of Snow White and the Seven Dwarves by Liesl Shurtliff @lieslshurtliff 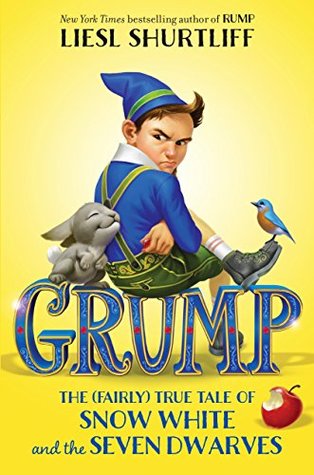 Title: Grump: The (Fairly) True Tale of Snow White and the Seven Dwarves

From the New York Times bestselling author of Rump, comes the true story behind another unlikely hero: a grumpy dwarf who gets tangled up in Snow White’s feud with the wicked queen.

Ever since he was a dwarfling, Borlen (nicknamed “Grump”) has dreamed of visiting The Surface, so when opportunity knocks, he leaves his cavern home behind.
At first, life aboveground is a dream come true. Queen Elfrieda Veronika Ingrid Lenore (E.V.I.L.) is the best friend Grump always wanted, feeding him all the rubies he can eat and allowing him to rule at her side in exchange for magic and information. But as time goes on, Grump starts to suspect that Queen E.V.I.L. may not be as nice as she seems. . . .
When the queen commands him to carry out a horrible task against her stepdaughter Snow White, Grump is in over his head. He’s bound by magic to help the queen, but also to protect Snow White. As if that wasn’t stressful enough, the queen keeps bugging him for updates through her magic mirror! He’ll have to dig deep to find a way out of this pickle, and that’s enough to make any dwarf Grumpy indeed.

Dwarves are generally born deep underground and feed upon the rare gems that they mine beneath the earth. However, when it was time for Borlen to enter the world his parents were close to the surface due to a collapse so along he came away from the normal depths for a dwarfling. This closeness to the surface became an obsession with the little guy as he grew with a crazy fear of the depths that the other dwarves enjoyed.

When Borlen got older his parents worried about his fitting in with those of his kind so they pushed for him to join a mining crew early. As Borlen took his place with six other dwarves on the crew he gained the nickname Grump due to his distaste of the job. His obsession with the surface only continued regardless though and one day Grump found his way to the top….

Grump was such a cute little version of the classic story from start to finish. You have the basic events that we all have known and loved all happen from a totally different prospective giving the story a whole new feel. Apparently the author has several other books done in this manor that I will definitely have to check out after enjoying this grumpy little gem of a story. A fun and fantastic twist to Snow White that I definitely recommend to all ages.

Liesl Shurtliff is the author of the New York Times Bestseller RUMP and other (Fairly) True Tales. She was born and raised in Salt Lake City, Utah, with the mountains for her playground. Just like Rump, Liesl was shy about her name, growing up. Not only did it rhyme with weasel, she could never find it on any of those personalized key chains in gift shops. But over the years she’s grown to love having an unusual name—and today she wouldn’t change it for the world!
Before she became a writer, Liesl graduated from Brigham Young University with a degree in music, dance, and theater. She now lives in Chicago with her husband and four children.