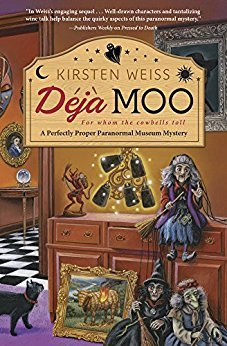 The holiday season turns udderly dangerous for Maddie and her paranormal museum.

Maddie Kosloski is no fan of San Benedetto’s Christmas Cow, a thirty-foot straw bovine that graces the town square every December. For one thing, the cow displaces her paranormal museum as the number one tourist attraction. Plus, every year, despite around-the-clock surveillance, the cow goes up in flames.

But this year, there’s more than just a fire blazing in Maddie’s wine-country hometown. One of the Christmas Cow guards has been found with an arrow in his chest, and Maddie’s new haunted cowbell exhibit is fueling a panic. Are the spirits in her museum getting too hot to handle? If Maddie can’t stop the hysteria—and the murderous archer—her holiday plans might not be the only thing full of holes.

Deja Moo by Kirsten Weiss is the third book in the cozy Perfectly Proper Paranormal Museum mystery series. Each book in the series features a new murder case to be solved so they could be read as a standalone if one chooses although some character/setting building would be missing if not starting at the beginning.

In this installment of the series we pick back up with Maddie Kosloski who owns the Perfectly Proper Paranormal Museum  in San Benedetto as she is about to join her mother guarding the thirty foot Christmas Cow that is on display every Christmas season. Unfortunately though as much as the cow being displayed is a San Benedetto tradition so is the yearly vandalism of setting the cow on fire.

On the way to meet with her mother though Maddie’s truck breaks down and as she is getting help on the side of the road she gets a frantic call from her mother that the cow is under attack. Arriving at the scene with her police officer friend in tow Maddie finds her mother very upset and the other man guarding with her shot with an arrow so Maddie again finds herself in the middle of a murder investigation as rumors fly that the curse of the cowbells that Maddie had just purchased for the museum has returned to the town.

I have to say this installment of the series gave me quite the chuckle with it involving the Christmas Cow. Some old family friends of ours decorate for Christmas every year with including a cow in their yard so I couldn’t help but think of it with every mention, although it’s no where near as big. But that cute little tie in to something in I know of in real life gave me a smile for sure.

As for the rest of the book, I still absolutely love this cozy series with a paranormal touch. There’s quirky characters, a ghost detecting kitty and a lot of fun packed in each installment. The book also goes a bit further than a normal cozy with actual intense danger while investigating to keep one hooked into the story.

The one thing I’m not a big fan of is the relationship/s in the series. Maddie started out dating a neighbor but that fell apart and now she’s crushing on a cop giving the book a bit of a love triangle feel that needs sorted out. It’s such a small part of the story as it is that I’m not sure why the switch up and back and forth so hopefully it will be sorted in the series soon. Otherwise, this was a nice addition and I’ll look forward to the next. Kirsten Weiss (San Mateo, CA) writes paranormal mysteries, blending her experiences and imagination to create a vivid world of magic and mayhem. She is also the author of the Riga Hayworth series and the Pie Town series (Kensington).