Cover Reveal: We Come With Vengeance by H.G. Muralee 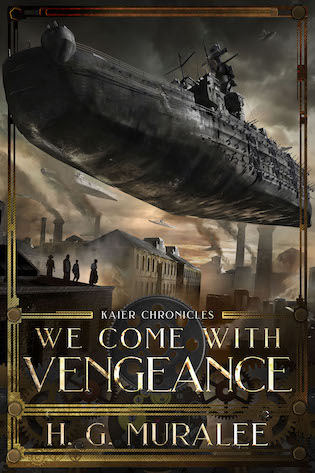 The war has stretched on for twenty years, and the soldiers, civilians, and nobles are exhausted. Towns grow more desolate while war technology continues to advance, leaving the rest of Kaier behind.

Felix—heir to House Leigh-Van—harbors resentment for the war that has claimed his sister’s life and his father’s ethics. Regardless, he follows his orders and is content to remain equal among his fellow soldiers.

When a routine stop for repairs puts Felix at the epicenter of a brutal attack impacting civilians rather than soldiers, he struggles to continue separating his ethics from his duty. He’s privately ambivalent but publicly supportive of his uncle—the king—when whispers of an underground rebellion start to circulate. The rebellion is gaining traction and could soon make a serious play at ending the war.

But when even the tactics of the resistance begin claiming lives as quickly as the war itself, Felix starts to wonder who will survive to see the peace they’re fighting for.

H.G. Muralee was born and raised in North Carolina. She graduated from Western Carolina University and works as a paralegal. When she isn’t writing, she’s reading far too many books, watching The Great British Baking Show, learning her husband’s native language, and playing with her dog, Oliver.