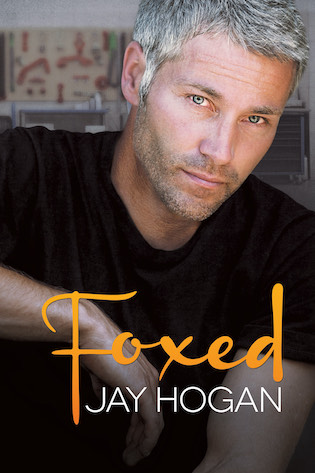 FOXED: To be thrown into a state of uncertainty—flustered, bamboozled, bewildered, puzzled, vexed.

AKA, me. Jed Marshall. 55-year-old successful classic car mechanic; divorced, mostly closeted, and whose wholly inexperienced bisexuality has suddenly awakened after one smouldering look and said, ‘Damn, who’s the hottie? ’Or words to that effect.

Cue, Nash Collingwood. 53-year-old scarily smart high school principal; out, gay, confident, and sexy as hell. He’s also my daughter’s boss. So, not complicated at all, right? Nash could ignite a bonfire with a single sultry look, comes fully accessorised with a charm offensive Churchill would be proud of, an easy-going flattery that thrills my heart far too effortlessly, and an impressive track record with men many decades my junior.

In short, Nash is everything I’m not, and everything I’ve avoided for roughly my entire life. He’s the hot rod to my sensible family car, that is if you like your family cars with a few dents, creaky suspension, unexpected backfires, and a dodgy stick.

The last thing I need is a relationship—especially with a man. I buried that pipe dream a long time ago and a little loneliness is a small price to pay. The festive season and long summer vacation are on our doorstep. I’m finally getting things right with my family who mean everything to me, and I don’t want to mess that up.

But Nash doesn’t care about my awkward inexperience, or clumsy excuses, or any of my insecurities. Nash only sees me. He wants me. For the first time in years, I feel alive and sexy and a whole lot more than just a good father and grandfather.

I should walk away, but the closer Nash and I become, the more he fills my grey world with colour, and the promise of a second chance at love I never thought possible.

“Hello?” The tentative greeting was followed by a series of knocks on the open hangar door of the workshop.

I leaned forward in my seat but couldn’t quite see who it was.

Shit. It couldn’t be. But the voice was familiar, too damn familiar, and a warmth curled low in my belly as my heart ticked up.

“Sit.” Rollo waved me down. “I’ll see to whoever it is.” He wiggled out of his chair and headed out into the workshop while I edged toward the door for a look, grateful for a little more time to get my shit together.

But when I saw Nash standing there in tight blue jeans and a black button-down, looking slightly nervous and way too fucking lickable, the warmth in my belly turned into an embarrassing flip. Rollo laughed at something Nash said, and the next thing I knew he was headed back to the office with Nash on his heels, the man’s curious gaze sweeping right and left. The closer they got to where I was standing, the more my stomach clenched.

What the hell was he doing here?

“You okay, Boss?” Jemma suddenly appeared next to me, and I realised my hands were fisted and sweating. “Do you know him?”

“Yes.” I rubbed my palms down the front of my coveralls and gave a half shrug. “A little.”

Jemma shot me a curious look but said nothing.

Rollo walked into the office and waved a hand my direction. “Here’s the man himself. Would you like a coffee, Nash?”

Nash stopped just inside the door with his back to the others and cast an apologetic half-smile my direction. “I don’t want to take up your time if you’re too busy. It’s your call, Jed.”

We both knew he wasn’t talking about the workshop, and with my overall sleeves tied around my waist and only a thin black practically not-there singlet standing between me and the man’s heated gaze, warmth flooded my cheeks. When he was done checking me out, his eyes returned to mine and his mouth curved up in an appreciative smile as he pointed to my cap bearing the slogan Ford Mustangs: Better than Sex. “Nice hat.”

And—oh my fucking god, I was getting hard.

“Boss?” Rollo was still waiting on my answer, which had been far too long coming. “Should I make Nash a coffee or not?”

Rollo and Jemma exchanged a puzzled look, then grabbed their unfinished drinks and promptly left with Jemma casting a final what-the-fuck look over her shoulder. I answered with a shrug and swiftly closed the door, watching through the glass as they exploded into hushed conversation and headed for the outside table and chairs to finish their coffees. When I was sure they were out of earshot, I turned to Nash, who had his palms up, and immediately apologised.

“Jed, I’m so sorry if I’ve fucked up. The last thing I wanted was to make things awkward for you, I . . .” He trailed off, chuckling, and shaking his head. “Well, shit, that’s a damn lie. It was hardly going to be anything but awkward, was it? Crazy principal chases after his reluctant crush? Borderline stalking, at best. I think I just motored straight past undignified and crashed into abject humiliation. I have no excuse other than—” He hesitated, his gaze fixed on mine as he nibbled his bottom lip, before finally continuing. “I wanted to see you again. It’s as simple as that. And if that’s not okay, I’ll leave right now.” His words ran together, and he shook his head like he was angry with himself, his cheeks blazing, his gaze darting sideways to the window.

But I was stuck on reluctant crush. My heart stuttered in my chest as I tried to wrap my head around all of what he’d just said.

I still hadn’t answered when he finally groaned, “Can you just put me out of my misery? And I’ll be gone.”

And with those few simple words, all my noble good intentions to rise above the carnal temptation that Nash Collingwood embodied with fucking bells on flew out the window under jet-fuelled propulsion. Martyrdom clearly wasn’t what it used to be.

And also, he looked way too fucking cute standing there looking a whole lot less confident than usual. This was a Nash I could relate to.

I gave a slow blink and breathed out a sigh. “It’s . . . fine. I’m not sure what good you think it will do, but take a seat.” I headed for the espresso machine, feeling like a tongue-tied teenager. “How do you have your coffee?” Heart, humour and keeping it real.

Jay is a 2020 Lambda Literary Award Finalist in Gay Romance and her book Off Balance was the 2021 New Zealand Romance Book of the Year.

She is a New Zealand author writing mm romance and romantic suspense, primarily set in New Zealand. She writes character driven romances with lots of humour, a good dose of reality and a splash of angst. She’s travelled extensively, lived in many countries, and in a past life she was a critical care nurse, nurse educator and counsellor. Jay is owned by a huge Maine Coon cat and a gorgeous Cocker Spaniel