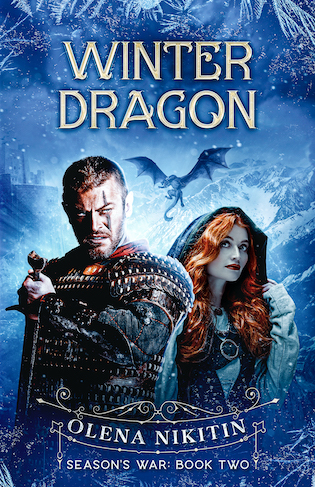 “When a Chaos mage fights, only blood and scorched earth remain.”

Some victories are more costly than others, and Ina was the one that paid the price.

Determined to rescue her dragon, the newly appointed royal witch embarks on a gruelling journey through the wintery Grey Mountains. The weather is not her only obstacle, as the enemy forces gathered in the kobold mines have only one goal.

To capture the Chaos mage and deliver her to the heart of the mountain.

With the help of Sa’Ren, Ina arrives at Castle Liath almost unscathed, but her joy is short-lived, as its granite walls hide a shocking revelation.

With blossoming love shattered by a possessive dragon’s claim and an impossible mission to fulfil, will the mysterious Blessing of the Mountain help or hinder her efforts to protect Cornovii?

Immerse yourself in the second book of Season’s War, where passion mix with cruelty and the world-changing power is buried deep in the ancient tomb guarded by the stern Mountain God.

A flash of movement caught her attention. Next to the stables in the small courtyard, Ren danced with his sword. That was the only way she could describe his fluid, graceful movements as he glided around the small space. Relieved to see he’d recovered from their ordeal and fascinated by his technique, Ina grabbed the poker from the fire and clumsily followed his moves. Despite feeling embarrassed at her lack of skill, she followed the more straightforward combinations. If I can’t work my magic, it would be helpful to know a trick or two.

Ina had never trained in combat, as her mother and great aunt wanted her to comport herself as a lady, and by the time she started university, enough people had belittled her inability to work any branch of Order magic that all confidence to try it was gone. The few attacks the witch could manage, she had learned from her mercenary friends in the tavern. Not that she would ever start a tavern brawl—not on purpose at least—but after getting caught up in two fights in Gruff’s place, Janik, the bloody idiot, taught her how to disable any drunk man who

saw a woman as an easy target. Ina pictured her former associate as she thrust the poker forward, pleased at how satisfying it felt.

‘Die! ’she shouted, preparing to kill the wardrobe when the door snapped open, and Ren charged into the room.

Despite his laboured breathing and heavy perspiration, the warrior’s eyes were focused as he looked around the small room, sword drawn and ready to strike the enemy. As he noticed Ina, alone, her poker pointed towards the wardrobe, he stepped closer and turned to the potential danger.

‘Ina? Move back. I’ll deal with this, ’Ren said slowly.

‘But Ren—’ she tried to say, but he raised his hand to silence her.

‘Step away from the wardrobe, ’he said, crossing the small room, not a single plank creaking beneath his feet.

Ina rolled her eyes and stepped aside. The warrior yanked the door open, revealing an empty interior and a few spiders running away from the sudden light. Still, it wasn’t good enough. Ren poked and prodded the back panel before he turned around to Ina.

‘My lady, who was attacking you? ’he asked, and despite the calm tone of his voice, Ina noticed how on edge he was.

‘Why does everyone always assume someone’s trying to kill me? ’She could not resist but answer his question with one of her own.

Ren just raised his eyebrow. ‘I saw through the window you were stabbing something and heard a commotion in your room, and you shouted, “Die!” when I was running up here. Care to tell me who was it and where they are now?’

Putting it like that, Ren had a point, and now it was her turn to explain. Pink shades of embarrassment blossomed on her cheeks as she started. ‘My magic is gone, for now. I can’t even start a fire, and I don’t know how long it will take to get it back. I saw you practising, and I wanted to learn. ’Ina tried to hide the poker behind her back. ‘That was what you saw in the window, and I may have tripped over the furniture a few times.’

Ren blinked several times, looking at her with disbelief. ‘You’re trying to tell me you practised Jian kata… with a poker? ’Something broke in him, and the warrior doubled over, laughing. He struggled to calm down, and gasping between bouts of laughing intertwined with cough, Ren stuttered, ‘But why, my lady?’

Ina huffed with exasperation. She was proud of her new moves, but Ren seemed to find it a joke. ‘I wanted to learn how to defend myself when my magic is depleted or blocked. I would like to know other ways to fight instead of always relying on magic and my Chaos. Right now, even a simpleton with enough strength could take me down. I don’t like it, Ren.’

Ren approached and reached behind her, taking the poker from her hand. ‘I will teach you, if you’d like. ’His eyes were smiling, and he behaved as if teaching her couldn’t make him happier. 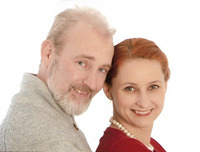 Olena Nikitin is our pen name. We are an enthusiastic couple of writers who are fascinated by the fantasy/paranormal romance genre and decided to write a book we would love to read

Behind the Pen name:

Olga – is Polish, armed with a wicked sense of humour and typical Slavic pessimism she is the wicked witch from the East. She has written stories since childhood, initially mostly about her work. As an emergency physician, she always has a story to tell and often not much time to write.

Mark is a typical English gentleman whose charm, refined taste and an impressive collection of books were tempting enough to make Olga leave her homeland. Don’t tease him too much; this man has an impressive sword collection and he knows how to use it. He also can fix everything, including Polish syntax in English writing.