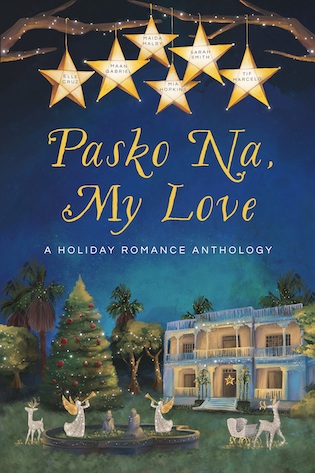 Family, heart, and a Merry Christmas Happily Ever After.

‘Twas the night before Christmas, and all ‘round Hacienda Luz bustled in celebration of Natividad Luz Moore’s 100th birthday.

A Filipino American woman of courage, strength, and heart, Lola Naty has touched the lives of many. Celebrities and politicians make merry, fine dresses and barong Tagalogs shimmer, and food and drink flow freely. And it’s all to honor family, tradition, and the very essence of that thing called love.

From acclaimed and bestselling Filipino American authors—Elle Cruz, Maan Gabriel, Maida Malby, Mia Hopkins, Sarah Smith, and Tif Marcelo—comes Pasko Na, My Love, a holiday romance collection that is sure to warm your heart and uplift your Christmas spirit. 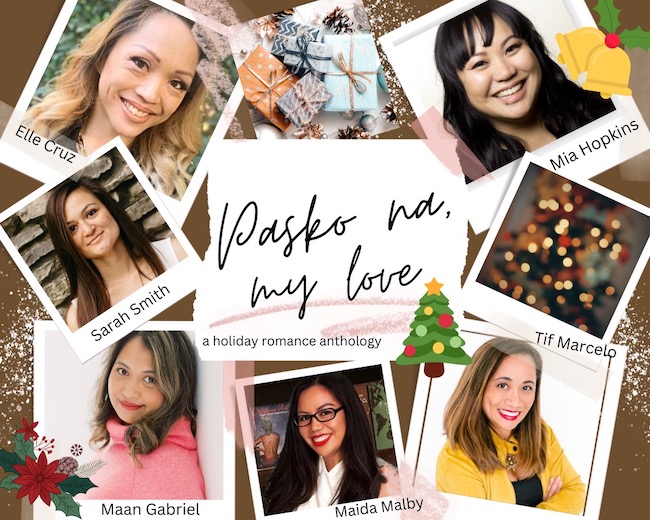 Sophie is a thirty-year-old with a wildly successful sex podcast. She has secretly been in love with Travis, her older brother’s best friend, for years. A mistake from the past tears them apart. Sparks fly when they when they see each other five years later during her grandmother’s one-hundredth birthday celebration. Sophie will have to put aside her insecurities to win back Travis’s heart so she can finally have the happily ever after she’s always dreamed of.

My Only Love by Maan Gabriel

He’s on his way to the White House. She’s fighting for women’s rights on the streets of DC.

Ten years ago, Drew and Angelica broke off their engagement while in law school. They both attribute their failed relationship to young love and ambition. But when Drew begs Angelica to attend his grandmother’s 100th birthday and pretend for one week that they are back together, sparks fly between them. Is it pretend when the feelings from the past never truly went away?

The thing is, Angelica doesn’t want to be Senator Hizon’s number one. Selfish as it may seem, she wants to be his only one – his only love.

So It’s You by Maida Malby

Vida and her maternal grandmother, Naty Moore, share a special bond—the same birthday on Christmas Eve, fifty years apart. This year, Lola Naty will celebrate her 100th birthday, and Vida plans to do everything to make sure her grand party goes off without a hitch. Even if that includes hiding the identity of the man she’s dating.

Rafa Balmaseda fell for Vida long before he became her grandmother’s physician. Ten years younger than her, he chafes at being kept a secret. When he pushes for a deeper commitment, will Vida continue to deny his role in her life? Or will she finally admit that they belong together?

Twenty-eight-year-old Ruby is in charge of catering the 100th birthday party of her grandmother. As the baby of her family, Ruby has grown up in the shadow of her older, more successful cousins, so she’s determined for her catered dinner to go off without a hitch. But when her head chef calls out with food poisoning the day of the party and sends chef Mason Waller as her replacement, Ruby is pissed. She’s loathed Mason ever since he screwed her over in culinary school five years ago. There’s still plenty of fire between these two … in more ways than one.

The Deal by Tif Marcelo

Prodigal cousin Oliver Moore returns to Hacienda Luz to attend Lola Naty’s hundredth year birthday party only to find out that he’s not on the guest list from divorcée event planner Norah Sha. In catching him as he tries to break in, she feels sorry for him and makes a deal to sneak him in, both discovering Christmas can still bring forgiveness and new love.