The Unsolved Case of The Secret Christmas Baby blitz with giveaway 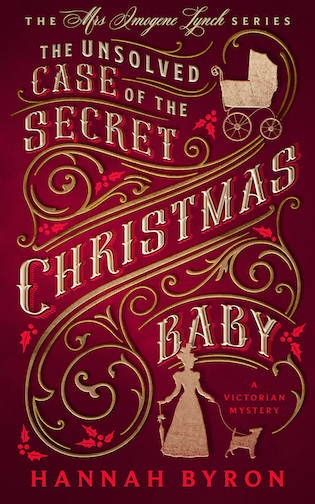 Fifty-year-old Imogene Lynch has recently moved to the tight-knit community of Dartmond after her husband passed away.

In the decades of her husband’s job as chief constable of the neighboring Landdulton, the childless Imogene often assisted him in solving seemingly unsolvable crimes. On his deathbed Thaddeus Lynch has one last request to his wife: solve the secret Christmas baby’s mystery.

Overcome by grief, but with the promise as a stamp on her heart, Imogene sets out in her roundabout way to unearth Sir Finley Lowther’s mysterious origins. The first trace leads to Miss Eloise Platt, a well-respected Dartmond shopkeeper.

But when a baby’s skull is dredged up from the bottom of Tiverstock Lake and Miss Eloise confesses to the murder, Mrs Imogene Lynch faces a stalemate. While the Dartmonders squabble over Miss Platt’s fate, the widow-turned-detective worries she’ll never fulfil her promise.

To break through her impasse, she pays a visit to the elderly Lady Lowther in Ridgeview Asylum with far-reaching consequences. For Imogene, the mystery is now solved, but getting Miss Platt to tell the truth is another matter.

With her characteristic quirky style, Mrs Lynch confides in the most unlikely candidate in her arsenal, her landlord, Mr Richard Hopewell. If the mute bookkeeper can shed light on what he witnessed on that fateful Christmas Day in 1845, she has the ally she needs to confront Miss Platt.

After fifty-one years, Constable Thaddeus Lynch’s brown file on the Secret Christmas Baby can be closed for good. With Finley’s adoption mystery solved and Miss Platt redeemed, all Dartmond joins in the merry 1896 Christmas celebrations.

This first book in the Victorian Cozy Mystery Series introduces Mrs Imogene Lynch, a willy-nilly detective who talks too much and eats too little.

“Now stop whining, Gertie, and just walk slowly down the stairs. Jasper isn’t even 2 stone. You carry heavier sacks of potatoes up the stairs.”

“But I carry the teddies up the stairs, Ma’am, not down. The dog is heavier than a three-year-old babber.”

A three-year-old baby? Have you ever heard of such an exaggeration? One day soon, that maid’s going to do me in. She shuffles down the stairs so slowly, I’m almost losing my balance, and mind you, these stairs are as narrow as a rabbit hole.

“Just hold him steady, will you, or you’ll scare him, and you know what happens then!”

But it’s too late. Jasper whimpers once, and the damage is done.

“Poor darling Jasper, we’ll sort you out downstairs. Don’t squeeze him so tight, Gertie, I told you a dozen times before. It frightens him. And keep moving now. You can change your dress in a minute.”

Dear Lord in Heaven, what is it with this maid? I can’t go through this every time with her and the dog.

When we finally land in one piece on the mat in the tight hallway near the glass-panelled front door, she puts poor Jasper on all fours. He looks up at me with those large, guilt-ridden eyes, but the stricken soul can’t help this. Enough is enough.

“It’s all right, Jasper dear. Gertie, I’ll ask if Neil Fritter wants to earn a little extra pocket money and carry Jasper up and down, all right? We can’t have you change dresses three times a day.”

“Nice of me? Well, it’s all right, Gertie. Now change and wash that dress. I’ll pop into Donald’s fish shop on my way back and see if Neil is available.”

Don’t think that I miss the flicker of hope in Gertie’s grey eyes. Yes, Neil Fritter is a bit of a looker, so she won’t mind seeing him upstairs. I’ll make sure he delivers Jasper at my front door and doesn’t come in. I’m not against romancing, but I’ll not encourage it either in un-betrothed people. That’s not my style. 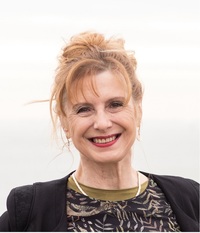 “Ever since I could hold a pen, I’ve written stories and poems, and I’ll write till my dying day.”

Historical fiction author Hannah Byron’s crib stood near the Seine in Paris, but she was raised in the south of Holland by Anglo-Dutch parents. In her bestselling WW2 historical fiction series, The Resistance Girl Series, Hannah’s heroines also traipse from one European country to the next, very much like their creator.

Now a retired university lecturer and translator, the European traveler and avid researcher is about to cross a new border and settle down south of Dublin.

What started as curiosity about her family’s connection to D-Day, evolved into an out-of-controlish study into WW2 history. To blame, or thank, must be Uncle Tom Naylor. If he’d not landed on the beaches of Normandy and help liberate Holland, her British mother would never have met her Dutch Dad after the war.

Strong women are at the core of her clean and wholesome romance novels. Every book is a tribute to the generations who started the women’s lib movement, got dirty in overalls, flew planes, and did intelligence work. Today’s girl bosses can but stand on the shoulders of these amazons.

Side-by-side with their male counterparts, Byron’s heroines fight for freedom, equality and… love.