A Valentine for Christmas by Reese Ryan blitz with giveaway 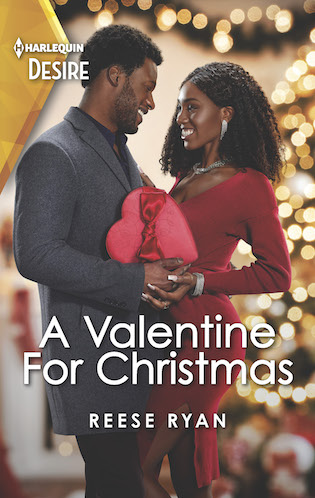 Opposites do more than attract when an older woman falls for a younger man in Reese Ryan’s brand-new Harlequin Desire series, Valentine Vineyards!

A red-hot romance between a career-focused woman and a determined younger man?

Dr. Julian Brandon is too charming, too sexy and too young for Chandra Valentine. But after the successful bachelor rescues her—twice—she owes him. Still reeling from life-changing family revelations, Chandra somehow agrees to pose as Julian’s girlfriend. And now the irresistible Julian has plans that start with seduction under the mistletoe and end with their fake relationship erupting into a scorching affair. Now Chandra’s questioning everything she believed about love…

From Harlequin Desire: A luxurious world of bold encounters and sizzling chemistry.

You’ll be swept away by this bold, sizzling romance, part of the Valentine Vineyards series:

Book 1: A Valentine for Christmas

Chandra Valentine gripped the handle of her rolling carry-on luggage as she watched the tiny regional plane taxi toward her gate at the Charlotte Douglas International Airport. She honestly wished she hadn’t seen it. Then she could pretend it was a larger plane. A stable

plane. The kind she’d become accustomed to flying in over her past thirty-nine years of life. Not one of those little puddle jumpers she’d always taken great pains to avoid.

She loosened her grip when she realized her nails were stabbing her palms. She opened her hand, studying the row of angry semicircles that trailed across her skin. Chandra took a deep breath, her eyes drifting closed momentarily. When she opened them, she was greeted by a penetrating dark gaze.

The incredibly handsome man tipped his chin in greeting as he rubbed his full beard. Typically, she’d considered a full-grown beard a turnoff. Who knew exactly what might be lurking in that thing? But for this brother, she’d make an exception.

He was dressed in an unbuttoned, green and black plaid shirt over a black Henley shirt, distressed jeans and brown Timberland boots. His lop-sided smile made her belly flip in ways it hadn’t in longer than she cared to admit.

Chandra gave him a quick nod and an awkward wave before sauntering away.

The man was fine. In ways she could wax poetically about for days. But this wasn’t a girls ’trip to Vegas. She was about to board a tuna can with wings so she could meet her dad in some small mountain town in Tennessee.

If she didn’t feel a sense of urgency to get to the little town of Magnolia Lake, where her dad had summoned her and her five younger siblings, she would’ve flown to the closest major airport then driven the remainder of the way through the mountains. But she was worried about her dad.

Abbott Raymond Valentine had turned sixty-nine on his last birthday—which she’d missed because she was at a company retreat in Utah. Her father had been in sort of a funk since his mother had died a few years ago. It didn’t feel quite like mourning, but something deeper. She hadn’t been able to figure out what it was, and her dad wouldn’t open up about what he was feeling. He’d been grumpy and evasive whenever she tried to broach the topic, which ruined the mood of their weekly calls. So she’d stopped asking, hoping he’d eventually be ready to confide in her.

But two weeks ago, her father had called a big family meeting via teleconference to inform them he needed to see all of them in person. Despite their pleading and threatening, her father wouldn’t offer the slightest hint of what this was about. Chandra was terrified about what might prompt her father to gather them together like this for the first time since her grandmother’s funeral.

It’d taken three days and an online calendar for the six siblings to figure out when their schedules would permit all of them to take time off their jobs and get together for at least a week, preferably two—as her father had requested. But here she was on her way to some tiny town in the Smoky Mountains where she only hoped they had internet, cell phone service and indoor plumbing because hiking in the woods was the limit of her outdoorsyness.

Chandra settled into a seat as far away as she could get from the handsome man with the gorgeous dark eyes who was making her rethink her stance on beards. Because as much as she’d like to get to know him up close and personal, she didn’t have time for extracurricular activities on this trip.

She was a problem solver. Had been since she was eight years old and returned from school to discover the Dear Abbott letter her mother had left on the kitchen counter.

Her father had been gutted. She, Nolan, Sebastian and Alonzo had been devastated. Just like that, she’d become the adult in the house as her father struggled to deal with her mother’s abandonment. In some ways, she’d felt like the only adult in the room with her family ever since.

Chandra rubbed her arms against the chill in the airport, still devastated by the painful memory.

Mr. Handsome stared at her from across the wide expanse.

Chandra pulled the book on teambuilding she’d been reading from her purse and opened it. She couldn’t afford to be distracted by the man. She needed to get to the bottom of whatever was going on with her father, solve whatever problem needed to be solved then return to San Diego. 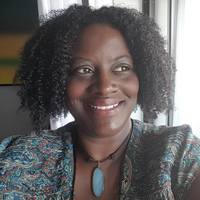 ← Angels of the Resistance by Noelle Salazar Blog Tour
The Heart of Neverland by Natalie J. Reddy book tour →