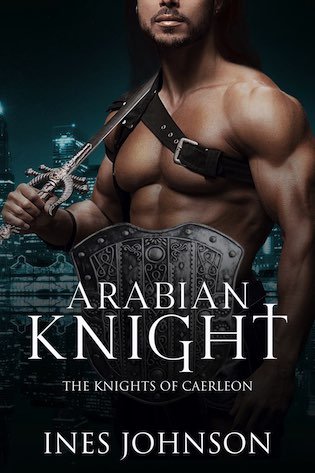 Sir Geraint gets tangled up in an arranged marriage in this steamy, magical modern-day adventure of knights, fairies, and slip knots!

Fairy princess Enid is tired of being a pawn in her father’s games of thorns. Don’t let the pretty petals of her flowers fool you because she’s no wilting wallflower. But when the king goes too far, she calls on the Knights of the Round Table to help free her from an impossible situation. She doesn’t expect for the valiant knight who comes to her rescue to sweep her off her roots as he comes to her rescue.

After pledging himself to the chivalric code, Sir Geraint feels useless as the modern women around him fight their own battles. Given purpose by the call of a fairy in distress, he rushes in—sword at attention—to restore her honor. When he learns that only a marriage of convenience will save her, he lays his sword at her feet and offers his name, and his heart. Agreeing to this forced union is against everything he stands for as a chivalric knight, but for once he’s willing to throw those vows out the window in exchange for making lifelong ones with Enid.

The price of her freedom is higher than she expected, but as Enid grows to care for her new husband and her new home of Camelot, there are secrets she must keep. Geraint longs to break through her protective barriers, but it may also mean breaking his oath to his brother knights. And when the fairy king’s plots and plans put Enid’s new life in jeopardy, will she have to betray the husband she’s starting to fall for in order to save him and everything he loves?

Arabian Knight is the third book in a series of modern-day retellings of the myths and lore of Camelot. If you like fierce knights who would lay down their lives for their brothers and lose their hearts for their women, then you’ll love the Knights of Caerleon.

He had never had The Talk with a woman before. With the squires, he knew what to say. It was largely some variation of practice abstinence or use your own hand. If the need was too great, then they were counseled to find a widow who knew the score or a woman of the night who agreed with compensation.

Geraint was not the type of man to begrudge a woman her pleasure. But he did believe that some women were meant to only be touched by their eventual husbands. If that made him a chauvinist or fascist, then so be it.

“My mother withered and returned to the soil many seasons ago,” Enid said.

And her father had proven himself neglectful and negligent many times over. So, as her husband, Geraint would take on this task. “When a man and a woman… or two individuals of compatible sex organs…when they care for each other… the man inserts his….” He motioned at his still straining erection.

“His stamen,” Enid offered, eying his cock with interest.

Geraint blinked at the foreign word she’d used. He’d never thought of plants as being male or female. “When a man inserts his stamen into a female’s…”

Though the words weren’t the same naughty ones that humans would use, warmth spread through Geraint’s cheeks to hear her speak in such a manner. He hadn’t been with crass women. None had referred to their intimate parts as their pussies or his dick. But he loved hearing the coarse words from Enid’s delicate mouth. He wanted to hear her say stamen again. But first he wanted to be inside her pistile.

“Go on,” she said. “When a human male inserts his stamen into a female human’s pistile… Is there something different that happens after that?”

He was shuddering like an untried teenager. His brain was filled with visions of him and Enid in a field of flowers as he thrust inside her lush body. His wife was a dirty talker, without her even knowing it, and it delighted him.

She seemed to know the mechanics of the act. He gave himself a shake before speaking again. “No, there is nothing different between men and women. A woman loses her virginity when a man puts himself inside her for the first time.”

“The first time? Why is that important?”

“What about the times after that? Does she become a virgin again when she takes a new man into her bed?”

Geraint didn’t like this frame of questioning. “There will be no one else anywhere near your bed.”

Enid nodded vigorously at that pronouncement. “Yes, I would prefer to be monogamous. I’ve pollinated with enough plants.”

Geraint knew that most marriages suffered from communication issues. He ran her words through his head again… and then again. No matter how many times he repeated that last sentence, it still made no sense.

Her hand reached out to him, stopping just before touching his arm. The gesture felt patronizing as her features turned from confusion to concern. He felt a flush creep up his neck as she studied him anew.

“You haven’t had sexual intercourse with another of your kind, I mean? Are you a virgin?”

“No, I’m not a virgin.” His brows wanted to rise into his hairline, but his face went still. No, not still. The bottom half of his face went heavy due to the tension in his jawline.

“Well”—Enid raised her hands, showing him her empty palms—“neither am I.”

The bite of his words must have been loud and clear because she dropped her hands back at her side. A green vine curled around her index finger. Out of self-protection or self-defense, he didn’t know. What he did know was that he was being an ass.

“I have a feeling I don’t want you to define the word slut.” She crossed her arms at her midsection. The small vine snaked around her bicep and over her shoulder like protective armor.

Armor against him—the man who had just sworn that no harm would ever befall her again. Yet here he was, standing in her bedroom and making her feel shame. This was not how he had expected his wedding night to go.

Unfortunately, there was now a weary set to those sweet lips he’d tasted just a moment ago. There was a guarded expression that snuffed out the light in her eyes.

“I’m feeling rather tired after all the excitement,” she said. “Perhaps we should just retire so that we’re ready for our journey to Camelot in the morning.”

“But we need to consummate the marriage.”

The words came out of his mouth before ever setting foot in his brain. The directive hadn’t come from the top down. No, it had come from the groin up. Despite all his talk of virginity and pollination, his cock was still standing by, eager for some attention.

“Proof.” Once again, Geraint cursed that he was thinking with his small brain rather than his big brain.

He could not explain to her the medieval notion of proving a wife’s purity by the blood that could be found on the sheets after the bed sport of the wedding night. Nor did he want to go into the modern laws that sex had to happen in order for the marriage to be deemed legal. Especially when in most first world countries nowadays, all it took was the signing of a legal document.

Geraint had none of these backups to prove that Enid was now and would forever be his. She could walk away from him at any point, and there was nothing he could do about it.

Except she wasn’t leaving the room. She was slipping off her gown to reveal a sheer slip beneath the garment. Were his deepest desires about to be consummated after all his blundering?

Geraint nodded mutely as Enid slipped beneath the covers. When he took a step toward the bed, she didn’t tell him to go. The bed creaked under his weight as he sat down on the mattress.

“That is all I require of you,” she said. “Then you can consummate me as often as you like.”

Enid turned over, giving him her back. Geraint wanted to reach out to her, to touch her. Though she was his wife, he didn’t feel he had the right. Not after insulting her honor. Again.

Lover of fairytales, folklore, and mythology, Ines Johnson spends her days reimagining the stories of old in a modern world. She writes books where damsels cause the distress, princesses wield swords, and moms save the world.

Tired of newsletters? I get it. Just click the orange FOLLOW button above and Amazon will alert you every time I have a new release 😉

One Comment on “Arabian Knight by Ines Johnson blitz with giveaway”