Angel of Ashes and Dust by D.H. Nevins blitz with giveaway 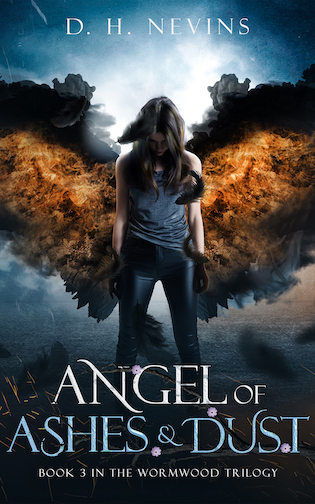 The end of her people and the death of a planet are looming over her. Kali Michaels must choose between the illusion of safety and the danger of her own power in this anticipated and heart-stopping finale to The Wormwood Trilogy.

Kali learned the hard way that her abilities cannot be trusted if they can be used against her. In an effort to protect those she cares about, she is determined to let the power of her Shadow lie dormant, despite the dangers rising up around her.

Now, tormented by an unstoppable enemy, she and Tiamat Wormwood must try to lead others while doing the impossible—ensuring the survival of humans and half-angels alike.

But how can she partner with Tiamat, when her proximity could kill him?

And how can the Nephilim, Tiamat, be trusted to save a planet, if he is the one who shattered it in the first place?

Little do they know that sometimes, for new beginnings, that which they love must first be destroyed.

I glared at our wilted set of crops, trying to reconcile myself to the idea that the Earth’s soil was likely poisoned. One thing after another, I thought. We can’t overcome everything.

I glanced over at him, meeting his even gaze. He smiled at me then, slowly, and I let the warmth of it spread through my body.

“We will get through this,” he said, and I almost believed him.

There was something about being with him—it was a feeling that everything was right, like some cold, wayward pieces of a puzzle were falling into place. I bit my lip and looked back over the field. But I can’t be with him… We can’t…

And then I was warm. His arms circled around me, his chest pressing against my back. Without thinking, I leaned into him, and he brushed his lips along my neck. My emotions exploded and fire burned in my chest. I gripped his arms, holding him against me, trying to keep my reactions in check.

“We will find a way forward,” he murmured, his breath against my skin. “And if we discover there is no way, then we will forge a new one. Together.”

Together. An impossible word.

Impossible, yet I wanted it more than anything. Here, so close to him, I was burning. I was drowning. Not able to resist any longer, I turned and kissed him, and the flame in my chest responded, exploding through my veins. My fingers curled into his shirt as his hands wound through my hair. I let myself float in it for a moment—a pure, blissful moment—before I gently stepped away. I moved out of his arms—to a place where I was cold. To where I was empty.

His eyes were like an animal’s, wild and electric, and we watched each other as we silently reined ourselves in. The loss of him settled like a pit in my stomach. “There is no, ‘together, ’Tiamat. Not for us.”

His lips parted, his face going blank from shock. “What?”

“This is nothing new. We can’t even be near each other. It’s killing me!”

“Kali,” he pleaded, grabbing for my arms. His nose had started bleeding, but he briskly swiped it away. Did he think I wouldn’t notice the blood?

I backed up, yet he continued toward me, one step after another. “You’re wrong,” he said. “What you just said is entirely new! Proximity is difficult for us, I know. And yes, we have to be careful.” I climbed up on a mound of earth and debris we had cleared from the field, trying to put some space between us. Seeing it, he stopped his advance, his hands dropping to his sides. “But … we are meant to be together,” he continued. “Can you not feel it? Kali! Tell me you don’t feel that.”

“I have to say it!” I blurted. “I can’t do this anymore, Tiamat,” I said, gesturing at the space between us. “I want to get close to you… I need to. Something inside me feels wired that way. And it isn’t fair.” His eyes were wide, swimming with a look of disbelief. And loss. I ripped my gaze away, fixing my stare on the dirt by my foot.

“Have we been reduced to this?” he asked. “Where you won’t even look at me? Where our love has become pain?”

“Then I choose death.” His voice was a growl. “I have said it before. It is mine to choose.”

“No!” I shouted, snapping my eyes to his face. “I won’t argue about this anymore. It’s the same thing, around and around and around!” I felt my eyes burning and beginning to fill. I blinked, trying to keep the tears at bay. “Every second we’re close, I can feel your Shadow slowly killing you.” My voice softened as I took in his stricken expression. “Tiamat … How can I be okay with that? How can I allow myself to be the cause of that?”

“Kali… you have never been the cause. It’s the Shadow.” He scrubbed his hands over his face in agitation. “I can figure this out. Just … hang on a little longer.” 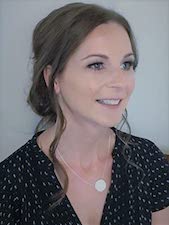 D.H. Nevins was born in Toronto and currently lives in a quiet area of Ontario, surrounded by forests and lakes. By day, she is a personable, friendly school teacher. By night, she silently chuckles as she writes about destroying the world. When she isn’t writing, she enjoys world travel, hiking, camping, flying around on her motorcycle or dabbling in live theatre.

← Cover Reveal: The Piece You Stole by Marleigh Kassidy
B is for Bonnie by Des Sweet blitz with giveaway →