Shadow of Fire by Kate Schumacher blitz with giveaway 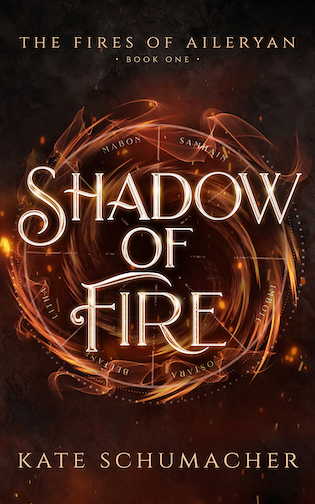 A potent power is about to be unleashed.

Forbidden and forged in flame.

Control over the elements is a gift from the Gods, but since the creation of the Rift, fire magic has been outlawed in Merawuld. The Rift is a source of mystery, fear, and, for some, a tempting source of power.

Ash is a fire caster who has spent years hiding her magic, but when her explosive powers reveal themselves she is imprisoned by the Mage Council. Ash’s powers are coveted by the High Mage, who seeks to use her as a pawn against not only his enemies, but his allies as well.

With the Bone Mother’s winter fast approaching, the fae Princess vows to fight against the corrupting influence of power, forming an alliance whose success rests on a human man’s desire for peace; a man who must decide if he will play the game he’s inherited or begin one of his own.

But in Aileryan, the Gods have their own plans. As the Mother of All turns the wheel of the year, the land is brought to the edge of war. Loyalty and courage will be sorely tested as paths intertwine and Fate plays her hand.

If Ash can’t learn to control her magic, the scheming of gods and mortals could spell doom for them all.

Laeli jumped as the sound of steel striking steel cut through the night. She slipped into a crouch, buckling on her scabbard, sliding the twin swords against her back and crept to the opening of the cairn.

As wings of light fluttered across the dark pit of the sky, Laeli saw him, his lithe body ducking and weaving around a sword wielded by a tall man in a cloak of fur. Two dead men lay on the ground, Bran’s dagger protruding from a chest. As Laeli watched, Bran’s opponent crouched and swept his leg wide, catching Bran off guard. Her companion tumbled to the ground and, before he could get to his feet, a sword swung through the air in a precise arc.

Laeli stared in horror as Bran’s head was swiftly sliced from his body. Slowly, so slowly, it fell, toppling to the ground to bounce and roll away. Laeli’s dinner rose like a snake and she turned to the side and vomited.

The sky opened, and as veins of light cracked the black canvas of night, the man in furs looked up and saw her. His sword glinted as he approached, blood dripping hypnotically to the ground.

Without another thought, Laeli sprang from the cairn and sprinted for the safety of the forest. The trees reached for her, inviting her in; she bent her head and dove between their trunks, taking shelter in their branches, in the roots that snaked from the earth and the rocks and soft grass that spread across the forest floor. The sky ripped apart again, illuminating the trees, the forest bending and swaying in the fierce wind as the storm intensified.

She pushed on, running at a reckless pace that no human could match, until her lungs burned and she fell to her knees in a puddle of dirty water, her breath coming in pants that shook her to the bone. She was still a long way from the border, from safety.

Laeli took a deep breath, preparing to run again, but the point of a sword pressed into her spine.

‘Get up, Witch. ’The voice was low, husky, his breathing quick. 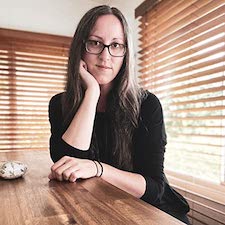 KATE SCHUMACHER is a writer, mother and teacher. When she isn’t writing, she is reading her way through an ever-growing TBR pile. Kate has wanted to be an author since she was a child, when she used to write stories about her friends and ‘publish ’them with the help of a stapler. Kate completed a Bachelor of Arts in Creative Writing and Journalism, and an Honours degree in Screenwriting, followed by a Graduate Diploma in Education. She currently works as a High School English and History teacher.

She lives in Northern NSW, Australia, with her partner, two children and three very spoiled cats. Shadow of Fire is her first published novel.