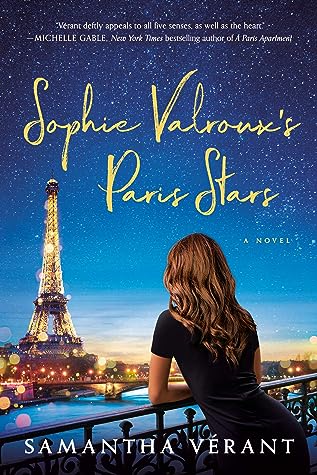 In this delectable novel, a chef on the rise fuels her passion for cooking while enduring the hardest challenges she’s ever faced after a debilitating injury.

Everybody wants a piece of grand chef Sophie Valroux. With her once-destroyed reputation fully recovered and then some, Sophie is making her mark in the culinary world. She’s running the restaurants of Château de Champvert, the beautiful estate that she inherited from her grandmother. She and her fiancé, Rémi, are closer than ever, and she’s even bonding with his daughter Lola. Everything should be perfect.

Yet, Sophie still feels something in her heart is missing.

When she’s invited to cook at an exclusive event her culinary idol is attending, she thinks this could be the thing to catapult her to greater heights, maybe even bring her one step closer to her one and only dream of achieving the stars—Michelin stars.

But fate has other plans for Sophie. After she accepts to cook for the Parisian elite, her world crumbles. She suffers a fall and loses her senses of smell and taste. Certain that her career will vanish if people find out, she keeps this secret to herself, not even telling Rémi. She fakes it all: the menus for every meal, the taste of fresh figs, the juicy cherries in the orchard. All she has to do is get through life—and the event—tasteless without missing a single step. Fake it ‘til you make it…right?

Sophie Valroux’s Paris Stars by Samantha Vérant is actually a second contemporary with a touch of romance novel featuring the main character, Sophie Valroux. The first book, The Secret French Recipes of Sophie Valroux, began the main character’s story and now it’s continued in this novel making it best to read both in order. However, I did not know there was another book when picking this one up and I still very much enjoyed the story so I will say with confidence this one can also be read as a standalone.

Now Sophie is mourning the loss of her grandmother and trying her best to handle her new inheritance, her grandmother’s restaurants of Château de Champvert and her beautiful estate. Sophie is also balancing her relationship with Rémi when she gets an invite to join an exclusive culinary event which she believes will be a good step in her goal of attaining Michelin stars for her cooking. Just as Sophie is set to leave though she has a fall which seems to somehow take her sense of taste and smell.

Being a fan of travel I always enjoy picking up books from around the world so of course this one being set in Paris caught my eye. As I mentioned I had not read the first book and didn’t even realize it existed until after I’d read this one with the author doing a great job explaining events that happened so I never felt left out or wondering who Sophie was and how she got to where this story takes place. Having really enjoyed the characters and story in this one I’d definitely return if Sophie’s story continues or just read more from this author in the future.

Samantha Vérant is a travel addict, a self-professed oenophile, and a determined, if occasionally unconventional, at-home French chef. She lives in southwestern France, where she’s married to a sexy French rocket scientist she met in 1989 (but ignored for twenty years), a stepmom to two incredible kids, and the adoptive mother to a ridiculously adorable French cat. When she’s not trekking from Provence to the Pyrénées or embracing her inner Julia Child, Sam is making her best effort to relearn those dreaded conjugations.

← Halloween is coming… Let’s Jam!!!
Cover Reveal: How To Rope A Valiant Cowboy by Anya Summers →