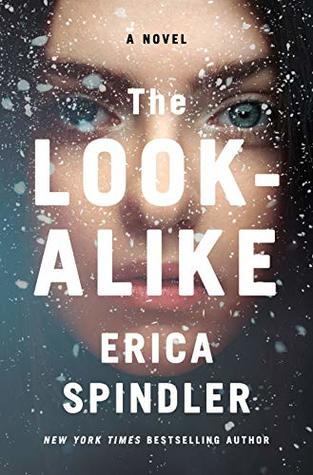 From Erica Spindler, the New York Times bestselling author of The Other Girl and Justice for Sara comes The Look-Alike, a thrilling psychological drama about a woman who believes she escaped a brutal murder years ago—but does anyone else believe her?

Sienna Scott grew up in the dark shadow of her mother’s paranoid delusions. Now, she’s returned home to confront her past and the unsolved murder that altered the course of her life.

In her mother’s shuttered house, an old fear that has haunted Sienna for years rears its ugly head—that it was she who had been the killer’s target that night. And now, with it, a new fear—that the killer not only intended to remedy his past mistake—he’s already begun. But are these fears any different from the ones that torment her mother?

As the walls close in, the line between truth and lie, reality and delusion disintegrate. Has Sienna’s worst nightmare come true? Or will she unmask a killer and finally prove she may be her mother’s look-alike, but she’s not her clone?

The Look-Alike by Erica Spindler is a psychological drama read. This one is fast paced and does deal with a character with mental illness. The story starts with a prologue from ten years before then jumps to the present moving around some in time.

Ten years before Sienna Scott had been walking home from studying at college when she stumbled across the victim of a brutal murder. Sienna could not get that night out of her mind so she left home and spent the next ten years in London trying to forget that night.

Now Sienna has returned home to help care for her mother who is struggling with mental illness. Sienna’s mother lives in fear that someone is going to harm her or her family which only brings that brutal night ten years ago back into Sienna’s mind. Sienna finds out that the case was never solved and now it back open which only leads to Sienna’s own paranoia.

As someone who has goals to read all the books I can get my hands on I love nothing more than fast paced books that seem like I fly right through them in the blink of an eye which was the case here. It didn’t take long to become engrossed in The Look-Alike and the pages began to fly by right after. There were also plenty of twists and turns along the way to hold my attention. I would definitely read this author again after finishing.

A New York Times and International bestselling author, Erica Spindler’s skill for crafting engrossing plots and compelling characters has earned both critical praise and legions of fans. Published in 25 countries, her stories have been lauded as “thrill-packed page turners, white- knuckle rides and edge-of-your-seat whodunits.”

Raised in Rockford, Illinois, Erica had planned on being an artist, earning a BFA from Delta State University and an MFA from the University of New Orleans in the visual arts. In June of 1982, in bed with a cold, she picked up a romance novel for relief from daytime television. She was immediately hooked, and soon decided to try to write one herself. She leaped from romance to suspense in 1996 with her novel Forbidden Fruit, and found her true calling.

Her novel Bone Cold won the prestigious Daphne du Maurier Award for excellence. A Romance Writers of America Honor Roll member, she received a Kiss of Death Award for her novels Forbidden Fruit and Dead Run and was a three-time RITA® Award finalist. Publishers Weekly awarded the audio version of her novel Shocking Pink a Listen Up Award, naming it one of the best audio mystery books of 1998.

Erica lives just outside New Orleans, Louisiana, with her husband and two sons and is busy at work on her next thriller.

6 Comments on “The Look-Alike by Erica Spindler #bookreview #thriller”