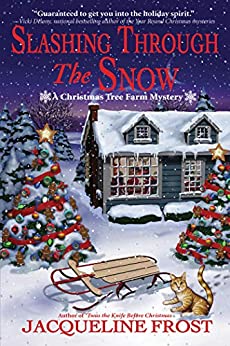 Title: Slashing Through the Snow

Reindeer Games Christmas Tree Farm is going into the B&B business, and Holly White is looking forward to her new role as innkeeper. Even better, Mistletoe, Maine’s sheriff, Evan Gray, has deputized his little sister Libby to help Holly wrap presents for Mistletoe’s toy drive. But a cold wind ruffles the cheery holiday decorations when a new guest checks in: Cleo, a vicious B&B critic, who could make or break the new inn. And the short December days turn even darker when Evan and Libby find Cleo’s dead body in the gift-wrapped toy donation box.

The suspect list is longer than Santa’s naughty list, and local resident Cookie is on it, since her fingerprints are all over the murder weapon, a metal nutcracker that she gave to Holly. So is Libby, who recently moved to town from Boston in less-than-savory circumstances. But cranky Cleo was an oh-holy-nightmare to lots of the townsfolk, such as Evan’s reporter friend Ray; Christopher, the inn’s former contractor; and confectioner Bonnie, whose Gum Drop Shop was a direct target of Cleo’s scathing prose.

To figure out the killer’s identity and clear Cookie’s name, Holly and her friends brainstorm at The Hearth, the farm’s café, while her mother keeps them fueled with Christmas goodies fresh from the oven. But if they can’t put the culprit on ice, Holly may never see another Christmas.

Slashing Through the Snow by Jacqueline Frost is the third book of the cozy A Christmas Tree Farm Mystery series. Each book in the series has it’s own mystery to be solved so they can be understood as a standalone. However, there is some character development that is carried over from book to book for those that read the series from the beginning.

In the first book of the series Holly White had returned back home to her parents Christmas Tree farm in Mistletoe, Maine after her fiance had broken up with her two weeks before their wedding. After jumping in and helping her parents to take her mind off of her troubles Holly had begun to feel at home again and decided to stay in Mistletoe, Maine.

Holly is now really settled into her life in Mistletoe and taking the family’s business, Reindeer Games Christmas Tree Farm, to the next level by opening a B&B. Holly is looking forward to the role of Innkeeper and getting closer to the sheriff, Evan Gray, who she has been dating. However, things of course go off the rails when a a critic, Cleo, is found murdered, her body found gift-wrapped in the toy donation box. Of course Holly is going to do everything she can to find the murderer.

The cozy A Christmas Tree Farm Mystery series is another that I started at the beginning and really enjoyed the first two books. After a long wait since book two I wasn’t sure this one was going to continue but I’m glad it did as I found myself right back being invested in the characters and story. This would be one of the quirky, humourous cozies that I enjoy quite a bit and this one has the bonus of everything Christmas tossed into the mix too. I would certainly read another book in the series if it does continue yet again.

Jacqueline Frost is a mystery-loving pet enthusiast who hopes to make readers smile. She lives in rural Ohio with her husband and three spunky children. Jacqueline is a member of the International Thriller Writers (ITW) and Sisters in Crime (SinC).