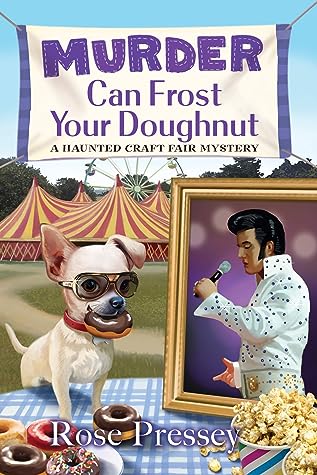 Title: Murder Can Frost Your Doughnut

Celeste has pulled up in her pink Shasta trailer, aka mobile art studio, to the Sevier County Fair in the mountains of eastern Tennessee to sell her paintings. A highlight of the fair promises to be the celebrity impersonation contest. But the low point is when Celeste and her floppy-eared white Chihuahua Van (short for Van Gogh) find an Elvis impersonator in his trailer doing a great impression of a corpse, clutching a doughnut in his hand.

Seeking a vision to solve the crime, Celeste paints her own Elvis portrait—and suddenly the ghost of the Elvis impersonator appears. They say fools rush in, but with the help of this spirit, Celeste sets out to find the real killer among all the fake celebrities. It’s now or never, because there won’t be time to tell the killer: “Don’t be cruel.”

Murder Can Frost Your Doughnut by Rose Pressey is the fourth book in the paranormal cozy Haunted Craft Fair Mysteries series. As with most cozy series each of the books in this series features it’s own mystery that will be fully solved within the book so each can be read as a standalone or in any order if choosing to do so. However, there is of course character building that carries over from book to book for those that follow the series from the beginning.

Celeste Cabot is an artist who has bought herself a small travel trailer in which she and her dog spend most of their time traveling from craft fair to craft fair. This allows Celeste the ability to spend her days painting as she sits in her booth outside the trailer at the fairs actually trying to sell her work to customers.One day at a fair however Celeste has a customer return one of her paintings claiming it is haunted and makes mysterious things happen. After investigating her paintings closer Celeste learns that there are hidden images within that she doesn’t purposely paint, weirder still somehow these paintings can summon ghosts.

Celeste has now travelled to the mountains of eastern Tennessee  where she has set up her trailer at the latest craft fair being held at the Sevier County Fair. Not only does the Sevier County Fair hosts booths such as Celeste’s selling her artwork but there in also a celebrity impersonation contest going on. As Celeste checks out the new fair she couldn’t help but notice all the impersonators around the event. However, Celeste never expected to check out a trailer where an Elvis impersonator had been killed. Of course knowing another killer is among them at the fair Celeste paints herself a portrait to summon another ghost to help her solve the crime.

I have followed the Haunted Craft Fair Mysteries series from the beginning since I am one that loves a good mixed genre read. With this series being one has the touch of paranormal in the cozy setting with a ghost helping to solve the mysteries I couldn’t help but like the series. As always I enjoyed Celeste snooping around to find a killer and had a good chuckle at the Elvis impersonator being involved. This latest installment could have used a few more suspects but it was still fun to read as the others have been so of course I’ll still be back for more in the series in the future. 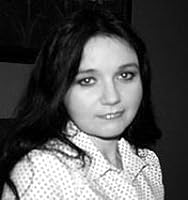 Rose Pressey is the USA Today bestselling author of the Haunted Craft Fair Mysteries and the Haunted Vintage Mystery Series. She enjoys writing quirky and fun novels with a paranormal twist. When she’s not writing about ghosts and other supernatural creatures, she loves eating cupcakes with sprinkles, reading, spending time with family, and listening to oldies from the fifties. Rose lives near Louisville, Kentucky, with her husband, son, and three sassy Chihuahuas. Visit her at RosePressey.com.