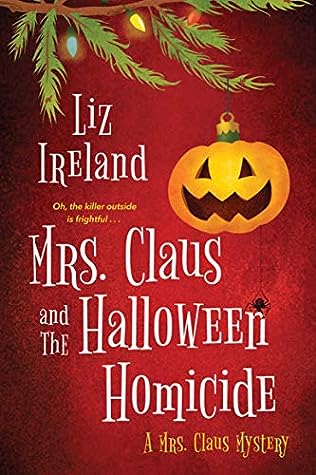 My rating: 4 starsApril Claus knows being married to the real Santa makes every day feel like Christmas. But when a different holiday arrives at the North Pole, so does murder . . .

For the first time ever, Christmastown is celebrating a strange new tradition—Halloween. But not everyone is willing to watch their dependable winter wonderland get overrun by carved pumpkins and costume parties. As a series of scary happenings hit Santaland, each one more intense than the last, April realizes having a role in the festivities could cost her family, friends—even her own life.

April isn’t the only unlucky target. Outspoken elf Tiny Sparkletoe is found dead in the snow outside his cottage, crushed in the middle of what appears to be a monstrous footprint. With mayhem descending like reindeer on rooftops, April must stop the Halloween killer before the fate of Mrs. Claus becomes another creepy tale to tell in the dark . . .

Mrs. Claus and the Halloween Homicide by Liz Ireland is the second book in the cozy Mrs. Claus series. As with most cozy mystery series each book in the Mrs. Claus series features it’s own mystery that will be fully solved with that book so they can each be read as a standalone or in any order if choosing to do so. There will be some character development that carries over from book to book though for those that follow the series from the beginning.

April Claus was just a regular woman living in the United States when she met Nick, the man she just knew she’d be spending the rest of her life with. What April didn’t know or suspect at the time was that the wonderful Nick she was going to marry was none other than THE Santa Claus. After marrying Nick April found herself moving to Christmastown in Santaland at the North Pole and living among elves with Christmas celebrated year round.

Christmastown has always been a one holiday town but April is glad to see the residents accepting that this year they will also be celebrating Halloween. Well, most of the residents have accepted the new celebration, not all the elves are happy. No one was expecting the series of random mischief though, especially not April who ended up involved in a funicular accident. As April begins to investigate the accident though Tiny Sparkletoe is found dead so April again finds herself teamed up with Jake Frost trying to catch a killer.

My first time around reading the Mrs. Claus series I was expecting the lead to be more like the image of a merry Mrs. Claus so it took a while to connect to the “regular” person lead. This time already knowing April and Christmastown I was able to dive right in to the Christmassy fun… er Halloween fun? It was a cute idea to bring another holiday to the small town and I love how everything Christmas or wintery gets incorporated into the story. This one is definitely for those that love a cozy mystery with a quirky and humorous side to them which is what I seek to find and love in them. I will definitely be back for a book three if there will be one in the future. 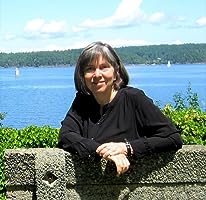 Liz Ireland is the author of many works of women’s fiction, romance, and mystery. She also writes under the names Elizabeth Bass and Liz Freeland. Like her character April Claus, Liz spends too much time in concert bands. Originally from the United States, she now lives on Vancouver Island in British Columbia. She’s currently working on the next Mrs. Claus mystery. Visit her at LizIreland.Wordpress.com